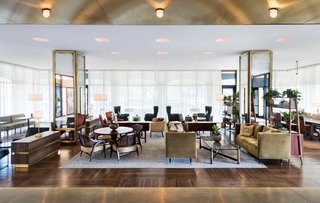 The Dewberry is an antique building, to be sure, but in its current incarnation as a boutique hotel it’s brand new. The downtown Charleston landmark formerly known as the L. Mendel Rivers Federal Building now bears the name of John Dewberry, the Atlanta developer who spent the better part of a decade transforming the structure. He didn’t just reimagine the building’s plain red brick facade, he commissioned local artisans to apply a custom-made gray limewash to the exterior. He didn’t just perk up the flowerbeds, he built a romantic walled garden evocative of old-world Charleston, then modeled the design of the hotel’s spa on his personal carriage house — and, along the way, assembled a dream team of architects, lighting specialists, and landscape designers, collaborating closely with a Brooklyn-based design firm and tapping a Charleston Preservation Designer to consult on the lavish marble and brass-fitted bathrooms.

Southern charm and grandeur with a clean, contemporary finish: that’s The Dewberry in a nutshell. Practically every surface throughout the lobby, living areas, and guest rooms is made of smooth stone or hard wood — cherry, oak, walnut, mahogany, travertine, Danby marble — while the furnishings are either vintage or bespoke and hand-crafted. Guest rooms have floor-to-ceiling windows, many with views over the Charleston Harbor, as well as original artwork and seasonal minibars curated by the hotel’s executive chef. At this hotel, it’s all about the finer things: many of the details, from the high-end linens and towels to the mattresses, were imported from Ireland.

Downstairs, a lovely living room awaits guests from noon till midnight. Go for tea in the afternoon, or a cocktail at the brass bar before dinner. Henrietta’s, the onsite brasserie that looks positioned to become a new staple on the Charleston dining scene, serves classic seafood in a refined setting. It’s the sort of place where the white tablecloths match the waiters’ white tuxedo jackets. The Dewberry is a reflection of the city’s romantic past and a hint at its future — a smart, stylish addition to the city’s hotel scene, a new landmark in an old building.