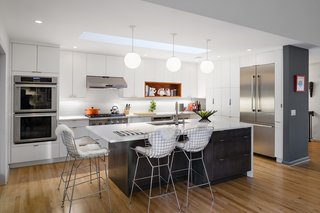 Sometimes, a little is enough—even when transforming a dark and dated construction into a light-filled dream home.

Attorney Dianne Bruning and her husband, David Owen, a technology entrepreneur, spent almost 12 years in a loft-like two-bedroom apartment in Lower Manhattan. “We loved it,” Dianne says. “It was the typical downtown industrial space, with massive windows and cast-iron columns.” Despite their shared affection for such quintessential city life, the couple felt it was time to give their two young children, Matilda and Maxim, more space and access to bicycle-friendly sidewalks.

So they packed their belongings and headed for Chevy Chase, Maryland, a community bordering Washington, D.C., to be closer to David’s family. When Dianne laid her eyes on Somerset, an incorporated town within Chevy Chase, it immediately felt like home. “We drove around, and there was one street with these sidesplits and I fell in love,” she recalls of finding an enclave with all its midcentury charm intact. David was hooked, too. “Like a lot of New Yorkers, we couldn’t conceive of living anywhere but in New York,” he explains. “So when we came here, we wanted to still live life on foot as much as possible. This neighborhood is within walking distance of plenty of restaurants and the metro. It turns out there is life after Manhattan.”

As soon as a coveted two-story—a raised 1968 ranch house previously owned by an elderly couple who had done few updates over the years—went up for sale, Dianne and David jumped on it. And architect Lou Balodemas jumped with them. Without ever meeting him, Dianne called and asked if Balodemas would walk through and survey the house to gauge its renovation potential before they decided whether or not to make an offer. “Lou had done nearby remodels I’d seen and liked,” Dianne explains. “We knew what we wanted to do as soon as we saw the house, and Lou got back to us the same day with his ideas and a draft budget. We bought the house based on that.”

The architect’s ideas were remarkably modest yet enormously impactful. His biggest proposed change involved knocking down the walls compartmentalizing the kitchen, dining, and living rooms, giving Dianne and David their desired open plan. He replaced the living room’s small windows and added skylights in the kitchen and dining areas. Balodemas augmented some of the private space, too: “I stole square footage from the kitchen and the master bedroom to create larger, better bathrooms and a larger master closet.”

During the initial walk-through, Balodemas took a quick trip up to the attic and discovered he could make another dramatic alteration with relatively little effort. “There were false ceilings and underneath were scissor trusses that framed the roof and created a kind of cathedral ceiling,” he says. Removing the false ceiling meant gaining approximately three feet in height without having to do any structural changes. “The foyer was easy, too,” he says. “I pulled the entrance back from the stairs to make it more spacious. Right away the house felt bigger.”

Balodemas created some midcentury curb appeal by re-siding the house’s upper portion with HardiePlank fiber cement and painting the lower brick section gray. He punctuated the facade with a bright-red double front door and replaced the garage door with stained sapele. “We wanted a purposeful wood element with a kind of Case Study look,” David explains. The architect used the statement-making doors to accentuate the house’s horizontal form, and, to make a more formal approach, he created a walkway paved with blue slate leading from the street.

Dianne—who spent years tearing out pages from her favorite modern-design magazines–considered the interiors a blank canvas for expressing her collected ideas. She chose white quartz countertops, white cabinetry, and white textured tiles for the backsplash in the kitchen, but color and pattern fill the rest of the house. Visitors are greeted with a silver-and-blue geometric-pattern wallpaper, and she applied a pink-and-orange scallop-print paper to the insets of the closet doors in Matilda’s room. For the children’s bath, she selected blue, white, and gray floor tiles with a whimsical circular pattern. “I was obsessed with finding something that reminded me of the tile I’d seen on our honeymoon in the hotel that Gio Ponti designed in Sorrento,” explains Dianne, describing the master architect’s Parco dei Principi hotel.

While the interior tells a personal story, the couple’s quest wasn’t at all surprising to Balodemas. The architect does more modern renovations in the area than one might think. “There’s mass appeal for the style of houses you see on Mad Men,” he says. “Those who grew up in that era now have the means to renovate and they don’t want the tired old thing anymore.”

This doesn’t mean Balodemas wants to recycle the same traditional forms. “I want to do things that are of our time,” he explains. “Suburbs across the country are full of plain midcentury houses with good bones and hidden potential. I didn’t have to alter this house much. It was halfway to where it wanted to be. I just pushed it the rest of the way.”

“We looked at so many colonials and couldn’t imagine what we’d do with all the tiny rooms,” says Dianne Bruning, who with her husband, David Owen, enlisted architect Lou Balodemas to update a 1968 home outside of Chevy Chase, Maryland.

The dining area (above right) boasts circa-1955 Friso Kramer chairs.

In the renovated kitchen space, Dianne chose quartz counters in Blizzard by Caesarstone.

“This is not a custom home—it’s the case of a builder who put something up in D.C. catering to a more traditional market,” explains Balodemas. “He framed the ceilings down to make them symmetrical. It would’ve been weird at that time to have the rooms oddly shaped. People were way too timid back then.” The rear terrace features new pavers from Pennsylvania Blue Slate and Crate and Barrel seating.