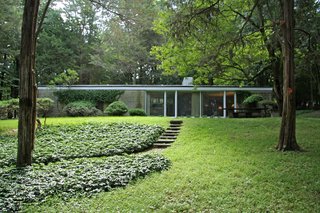 Under threat and in need of a new owner, the Booth House in Bedford, New York, is a minimal dwelling with a deep connection to its wooded surroundings.

Those who have dreamed of living in Philip Johnson’s renowned Glass House now have the chance to roost in its immediate precursor and the architect’s first built commission—the Booth House in Bedford, New York.

Completed in 1946, the residence was originally built for an advertising executive and his wife before becoming a rental property for the groundbreaking architectural photographer Robert Damora and architect Sirkka Damora in 1955. The Damoras, who went on to purchase the home, have been the custodians of the house ever since. Now 93 years old, Sirkka urgently seeks a new owner for this piece of architectural history, which is being offered at $1 million. Litigation over the title means that the Booth House faces being torn down, so its buyer will also be its rescuer.

Completed in 1946, the Booth House was originally built for an advertising executive and his wife before becoming a rental property in 1955 for the architectural photographer Robert Damora, and architect Sirkka Damora. The Damoras later purchased the home and have lived there ever since. Now 93 years old, Sirkka has been seeking a new owner for this piece of architectural history. Litigation over the title means that the Booth House could face being torn down—so its buyer will also be its rescuer.

The entryway leads into the living room, and a low wall hides the staircase that leads to the lower level from view.

Reminiscent of the Glass House, a monumental brick fireplace stands in the center of the living room.

Landis Gores, a fellow member of the Harvard Five, collaborated with Johnson about the finer details; the two would picnic on the site.

The original kitchen was designed by the Booths, and Robert renovated it in 2000, making it ergonomic for his wife Sirkka's shorter frame.

A large window from the bedroom overlooks the sunken terrace that allows the basement-level studio to open to the outside.

Built in the early 60s, the separate concrete-and-glass studio echoes the original home.

An archival photo shows the interior of the detached studio with drafting tables awash in light through the enormous skylight above.

As you approach the home from below, it gives the impression of gradually emerging from the natural landscape.