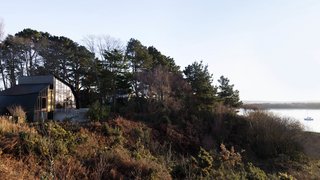 Designed by Cambridge-based Mole Architects for an architect and developer, the Houseboat is a curved, split-level structure brimming with evocative textures.

Overlooking Poole Harbour in Dorset, England, the Houseboat by Mole Architects takes the shape of an overturned boat with the two halves of its hull at staggered heights, echoing the reach of the surrounding pine trees. The blackened-timber structure serves as a guest house for Roger Zogolovitch, an architect and the creative director of Solidspace, an independent developer.

"To understand the design, it’s necessary to know something of the main house," says architect Meredith Bowles. The Houseboat resides in the garden of the Boat House, Zogolovitch’s main residence that was built in 1936 by a businessman and sailor—hence the salvaged second-class lounge from the SS Mauritania that was incorporated into the design. Coming into dialogue with this house, the Houseboat also opens up to views of the bay, albeit with the reversal of having the bedrooms below the living and dining "decks."

Upon entering, you are ushered into a wide hallway—formed by curving, panelled walls—leading to the lower-level bedrooms that are embedded in the concrete base of the house. A mosaic representing the fish and mollusks of the harbor adorns the solid walnut floor.

Left raw and textured, a concrete staircase with steel rope rails travels upward to the dining, kitchen, and terrace areas, while a walnut-clad bridge crosses over to the living room. Up one more level is the "eyrie," connected by an enclosed steel stair. Throughout the interior, strips of birch-faced plywood line the walls, spaced to expose the black neoprene layer, which gives guests the impression of being inside a boat and softens sound in the home. To the west, a dramatic, six-meter wall of windows provides a connection to the water and heathland.

Taking inspiration from nautical culture and demonstrating the split-level structure that characterizes Solidspace’s work, the Houseboat is a true expression of the landscape and its owner.

The Boat House, built by Mr. Cullen in 1936, is a white, cubist residence perched above the harbor.

A circular gallery occupies the floor above the repurposed second-class lounge.