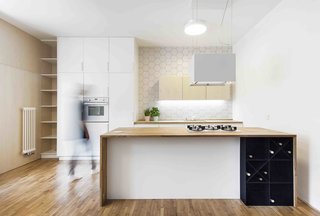 Located in a 1930s building in Prague, Czech Republic, this four-bedroom apartment has a bright nook, hidden study desk, and loads of discreet storage.

Designed by Czech studio Atelier 111 Architekti, The Apartment for Přemek in Vršovice, Prague, is a study in how to merge and maximize space with style. The project involved connecting two housing units to create a single 1,249-square-foot apartment for a young family.

Making only minimal changes to the floor plan, the architects merged the building's original three-bedroom unit with the adjoined studio to create a four-bedroom apartment that would accommodate the family’s daily functional requirements.

Upon entering the apartment, one immediately sees a view of the street through the large windows that stand behind a built-in niche sofa in the living room.

This window also draws in natural light, imbuing the apartment with a bright, cheerful ambiance. Using the protruding space created by the perimeter of the facade, this seating niche becomes a cozy reading corner with plenty of shelves on both sides. It also works well as a daybed or a sleeping area for guests.

Built-in shelves in the kitchen and entrance corridor offer tons of storage without visually dominated the interiors.

The master bedroom has an ensuite bathroom and a door that opens up to a balcony. Inside one of the closets is a hidden desk. The doors can be opened and slid back into the wall to create a streamlined study nook.

Opposite the master bedroom are two children’s bedrooms with their own wardrobes.

Parquet floors, stark white walls, and light wood cabinetry lend a sense of openness and levity to the concept. Earthy colors, along with a little dash of yellow and blue, result in an interior that's roomy, stylish, and highly practical.