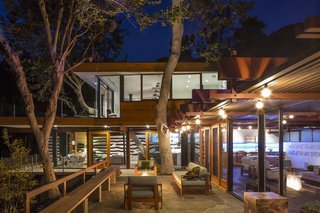 The design direction for the 1,500 sf addition was de­termined by the peninsular shape of the property, the desire to restore the existing 1950’s post & beam residence, and an interest in modifying the home’s program distribution, while respecting the original design character without direct replication. The addition’s orientation emerged as the negotiation between the existing house, the street, the site views, the sloping terrain, and the additional owner imposed restric­tion to retain both of the beloved sycamore trees, including one that listed at close to 45% and was planted directly within the optimal location for the addition.

By perpendicularly positioning the addition between the existing house and the street setback, the relationship between the interior of the house and the landscape are reinforced. The building’s massing strives to screen the living spaces from the adjacent street, while opening dramatically towards the hillside views. The multiple cantilevers of the addition extend over the hillside, projecting the interior into the tree canopy. Conversely, a sycamore tree is incorporated into the house, literally penetrating the space of the Kitchen, Family Room, Master Suite, and the Roof Deck.

The detailing attempts to sympathize with the structural expression of the original post & beam residence through the incorporation of a primary steel cross-hair structure dropped below the second floor framing that extends towards the landscape on all four sides of the addition. Both the new steel structure and the existing wood beams are painted red, while all fixed windows are black, and the operable doors/windows are a clear Douglas Fir. The marriage of the existing residence to the addition, while codified in the building materials, colors, and forms, is completed through the seamless ease of circulating between the two structures. In addition to the relationships formed on the interior, the exterior patios and landscape further reinforce the holistic site design strategies of the residence.

ANX / Aaron Neubert Architects uploaded Sycamore House through Add A Home.
Add your own project for the chance to be featured in Editor’s Picks.