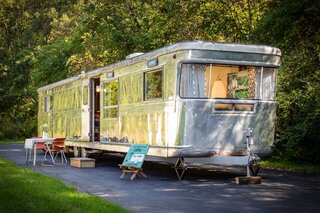 A Mansion on Wheels
The resto-modern design concept for the Spartan Imperial Mansion was to merge the old with the new and create a modern spin on the 1956 camper. The camper is only 336 square feet yet feels extremely spacious and is a very livable space!

The camper had been lived in on and off in its previous life, and was in a state of disrepair when Sondra purchased the camper for $900. With dedication and perseverance, you can find campers like this in rural areas and small towns as well as on Craigs List and other online sources.
Spartan campers were manufactured with aluminum airplane panels and the original design and manufacturing was such that this brand of camper is unusually structurally sound. We did not need to replace any of the exterior panels or structural studs/beams throughout the camper. However, the interior needed a major overhaul! We were delighted to be able to repurpose this 64-year-old structure into a modern dwelling!

If you know Sondra Phillips, then you know that she has discovered a love for campers and restoring them. So, when she and her partner stumbled across a Spartan Imperial Mansion from 1956 for sale, she could not help but buy it. Although it was a great steal, it was still in need of some major tender love and care, a project that they were more than happy to tackle.

At first glance the interior of the 42’ Spartan Imperial Mansion seemed salvageable. Salvaged items were portions of the original birch paneling, including an elaborate closet and dresser system in the bedroom, the bathroom cabinetry, and unique display shelving in the front of the camper. However, to prevent leaking and provide new insulation and electrical for today’s amenities, most of camper was dismantled down to the structure to allow for more design freedom. The gutting process didn’t come without its own set of surprises. A giant beehive and the skull and skeleton of a raccoon were found during the process! Planning is the key to a successful project. Field measurements of the existing camper were taken and drawn to scale in AutoCAD. These drawings allowed for accurate space planning, furniture and electrical planning and calculating quantities of wall and flooring materials. After exploring layout options, Sondra decided to keep the floorplan similar to its original design, yet create a more open and functional kitchen. The original L-shaped kitchen turned into a 2-sided galley kitchen to add more cabinets, counter space and better flow.

Economical materials were used, such as a corrugated galvanized ceiling that was installed that draws the eye upward and creates the illusion of a taller ceiling. It bounces light around with its reflective qualities, elongates the space with the linear pattern, and creates a great ceiling that will not be damaged should any water work its way in through the roof!

Birch wall paneling and LVT wood-look plank flooring were also added to give the space a sleek and modern look. A contemporary, blue/green IKEA kitchen adds color to the space. In the spirit of re-using and re-purposing, the focal point of the kitchen however is a vintage Westinghouse refrigerator. With a little bit of hard work and a fresh coat of orange paint, the vintage fridge fits in with the modern look of the camper while showcasing the beauty of the past. The orange paint adds a pop of color and brightens up the space. Other vintage finds include an orange chenille bedspread found on Etsy from the Netherlands, an antique typewriter cart from Katydid’s in South Haven, and the original Spartan serial number tag. All of these elements help tie the old with the new. Another fun element of the camper is the translucent Lumicor panel within the pocket door of the bathroom. This small feature adds pattern and color to what otherwise would just be a plain door, and allows natural light to transmit between spaces. Whimsical patterned curtains frame the windows in the camper and add more interest and color. Orange accents continue into the living area with a mid-century modern egg chair. Other furniture includes a grey convertible sofa, a seating poof, a small table in the living room, a compact dining room table and a queen size bed in the bedroom. All new electrical was installed, and a heater/AC unit was added to allow for a more comfortable living space.

The Spartan Imperial Mansion will be both a vacation home as well as a place to meet with clients on the lakeshore in Southwest Michigan.

Sondra Phillips is an interior designer with 30 years of experience and the founder and owner of SKP Design, a commercial and residential interior design firm in Kalamazoo, Michigan. Although the company has four main areas of focus - Hospitality Design, Office Design, Medical Design and Residential - they are known for tackling a little bit of everything in the field. For example, projects can range from small office designs, to national franchise designs, to large facilities, or even campers!

Sondra has shown this camper at the Gilmore Red Barns Spectacular, the Vicksburg Old Car Festival as well as the Turkeyville Vintage Camper Rally hosted by Terri Lynn Hall of Tin Can Tourists. She has now collected a total of eight vintage campers: Two Little Gem Campers, a Concord Traveler, a Chateau traveler, a Shasta, a Vagabond, the Go-Tag-Along and of course the 1956 Spartan Imperial Mansion. Sondra has a line of her design business called “Ready To Roll” where she gives vintage campers and other vehicles a new life. To see more of her projects, visit www.skpdesign.com.

uploaded Spartan Imperial Mansion through Add A Home.
Add your own project for the chance to be featured in Editor’s Picks.