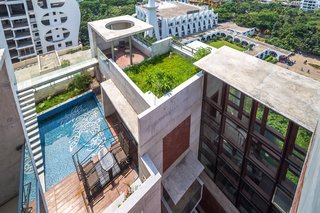 The project is situated at North-East facing corner plot in the posh residential area, Gulshan, Dhaka. Since the sun goes towards south in winter, so any construction will cast shadow in the northern part. Therefore the architect calculated how much sun the users are going to receive from the east during summer and also winter and decided to create a double height entry space on the eastern side. From where in the morning, low angle winter light can enter to the northern part lawn area. The lushes of greens around the area is merged into the site through the glass facades. The use of glass boundary wall further dissolves the periphery of the plot while developing and organizing the layers of city landscape. It invites the existing surrounding greens into the site giving an illusion of a wide open space as well as contributing to the society as a green space utilizing the trees along the site.

A water body is placed at the southern side as extension of the northern lawn on the other side of the glass reception lobby, so, the whole site is visually linked and a forms a continuous landscape.

From the green lawn of the ground floor to the green roof garden, the building opens up to the outside greens thus creating a beautiful timeless union between the nature and architecture. The Mosque area is continued into the site by integrating it along the site’s northern green lawn, the uninterrupted visual connection ends with a water body at the southern wall creating an endless harmonious flow of nature in the midst of the urban area.

Originally the given program was a flat twelve storied apartment building consisted of 23 apartments. Taking the advantage of 150 feet height limitation, the architect reorganized the skyline and deconstructed the spaces by generating duplex, triplex, roof top gym and gardens. The ceiling punch of the roof garden not only allows light inside and gives the users a sense of openness, but also reduces the load of the skyline as an earthquake security measure. The idea was simple, to design the building like a social sculpture grounded on an appropriate city landscape.

uploaded South 39 Huda's Skyline through Add A Home.
Add your own project for the chance to be featured in Editor’s Picks.