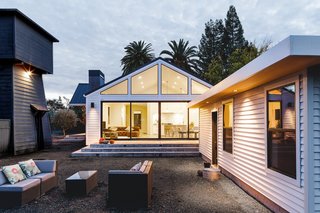 The project goals were to expand the building and play up the farmhouse aesthetic in finishes, which became a to the studs remodel. Originally built at the turn of the last century, this modest country house had traditional closed-off rooms and small windows facing the large lot with various outbuildings. The house was expanded by adding a master suite in a complementary shape. The existing portion of the home was modernized by opening the floor plan, modifying rooflines and adding large sliding doors to connect to the outdoors visually and physically. Finishes were kept neutral from white lap siding, standing seam roofing and concrete landings at the doors.

McElroy Architecture uploaded Sonoma Farmhouse through Add A Home.
Add your own project for the chance to be featured in Editor’s Picks.