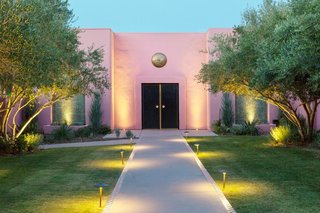 When you think of palm-fringed SoCal desert oases, the words “Palm Springs” naturally come to mind. But it’s actually the whole Coachella Valley you’re picturing, from Palm Springs proper to Indio, and everywhere in between. This includes the upscale resort town of Indian Wells, which is perhaps most famous for its annual tennis tournament, but which, it turns out, is a worthy destination year-round. And thanks in part to the newly rejuvenated Sands Hotel and Spa, it’s got a luxury boutique hotel that’s on a level, both aesthetically and in terms of comfort, with the best in the region.

It’s a thorough reimagining of the original 1950s-era Sands, updated by designer Martyn Lawrence Bullard into something very contemporary, whose mid-century references are conscious rather than inherited and whose Moroccan influence gives it a visual identity all its own. The rooms, just 46 of them, are given plenty of space to spread out, and many come with private patios or balconies. The spa, naturally, plays up the Moroccan angle, and the pool, with its cabanas, is a delight. And the restaurant, the Pink Cabana, will serve Mediterranean-inspired fare — perfect for the hot days and cool desert nights of the Coachella Valley.