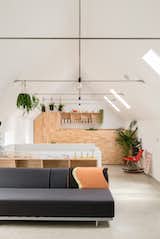 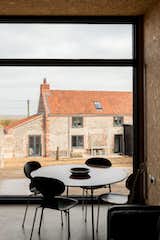 Once a cottage for farm workers, this house—which overlooks the Salthouse Marshes on the north coast of Norfolk—has been transformed into a comfortable home with a modern and upbeat Scandinavian vibe.

Refurbished by UK-based architectural studio Carl Turner, the house spreads over two levels and includes a large annex with a studio and workshop. It's being listed through The Modern House for $1,031,311.

Four spacious bedrooms sit on the ground floor, including a master bedroom with bespoke joinery and poured-concrete floors that's housed in a new extension overlooking the garden.

The first floor was designed as a flowing open-plan space with a rectilinear layout—the living area sitting on one side and the dining and kitchen area on the other.

The two areas are visually separated by a white, cube-like concrete rail structure at the top of the stairs that descends to the bedrooms on the ground floor.

Turner also designed the annex, which is outfitted with fully-glazed facades that present far-reaching views of the marshes. It's split into a workshop at the rear and a studio in the front—with a WC fitted between the two areas.

From the studio, steps lead toward a large shingle garden with a deck for dining and sitting.