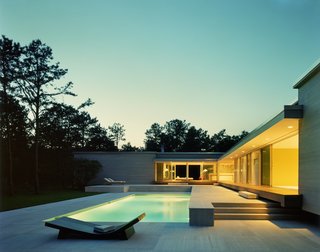 This house is a 4600 SF home on a 2.7 acres of wooded land in the middle of “potato fields” between the fashionable South and East Hampton area of Long Island, New York. It’s spatial configuration invites variety of personalities and occupants, from hermetic individuals to sociable couples or groups, to be “original” and invent their own way of habitation in this structure.

In contrast to most oversized showplaces, Suburban Mansions, and overstated Country Houses, this house is composed of two simple rectangular volumes forming an L-Shaped plan. It engages the landscape and the pleasures of being in the country by framing it. The center of the house is the main public space with a swimming pool, multi- level terraces, and a covered porch with a shower. This space accessible and visible to all other parts of the house, and at times visible to the neighbors and the street, becomes a stage for action and display. This private pool area acts similar to some beaches in the area, where the beach becomes a stage for exhibitionism and spectator-ship by parading bodies. Here one can display to the public one’s private fantasies and desires.

Inspired by Giacometti’s sculpture titled, “Figure in a Box between Two Boxes which are Houses”, the Sagaponac House-43 takes the form of a minimalist structure placed on a platform within the untouched natural landscape.
A large opening within each rectangular volume frame’s the private life in the house and the pool beyond. These openings appear and disappear via a system of metal shutters mounted on the exterior walls, investigating the cultural definition of the domestic enclosure. These metal shutters not only act as a shield against intruders when no one is at home, they also reveal & Conceal private and public hidden motivations, social interaction and exchange within and beyond the house.

Hariri & Hariri Architecture uploaded Sagaponac House through Add A Home.
Add your own project for the chance to be featured in Editor’s Picks.