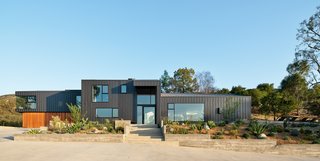 A completely transformative renovation opened this former tract home up to views, light, and its stunning outdoor setting.

It's all about the views, but this residence wasn't always this way. What is now a metal and cedar stunner situated on a private, hilly enclave above Calabasas, was once a darkly lit 1960s-era generic single family home. A two-year renovation made a total overhaul for an entrepreneur and his wife, empty nesters with kids living nearby. The architect, Brian Wickersham of AUX Architecture in Los Angeles, didn't change a thing in terms of the home’s footprint and rooflines; he couldn't. “We initially looked at building a new home, but quickly learned that because of an ancient paleolithic landslide, that the county requirements for restraining the hill would be cost prohibitive and time-consuming—potentially five or more years,” says Wickersham. “Instead, we devised a plan to work within the existing house footprint and building envelope for a project that would be classified as a renovation.”

In addition to these parameters, the homeowners tasked him with throwing out all of the old—down to the last salad fork—and bringing in everything new—all the while designing something where they could entertain a growing gaggle of grandkids. The result is a modern home that transitions from indoors to outdoors with the ease this property was intended for. “It’s about striking a balance between modest down-to-earth people and helping them realize they can be living a luxurious lifestyle,” says Wickersham. It’s about them living at a higher level of luxury."

A composition of dark standing seam metal and vertical grain cedar give the appearance of three cut pieces, shifted side-to-side, the wood being the cut face. The cedar siding also carries from outside to in, bringing warmth to the home and reinforcing the inside-outside connection.

AUX Architecture uploaded Saddle Peak Residence through Add A Home.
Add your own project for the chance to be featured in Editor’s Picks.