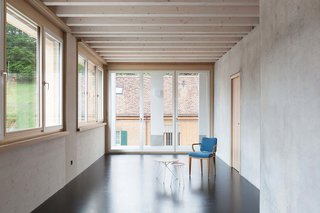 Rüthi is a minimalist architecture project located in Rüthi, Switzerland, designed by Schneider Türtscher Architekten. An ensemble of two houses with a connecting portico is embedded on the edge of a historically agricultural, today heterogeneously cultivated village in the Rhine Valley of Switzerland. The core idea of the project is based on the urban void. Two parallel set apartment buildings, a portico and a former farmhouse create a clearly composed courtyard. Both houses can host up to three different units because of a hierarchically formulated structure which allows a simple and variable floor plan. They allow different ways of living or working. Like a backbone, a solid in-situ concrete core connects the staircase and the main entrance with a solid loggia. This core hosts all serving rooms and functions as a storage-mass in the centre of a timber structure. Raised from the courtyard level, on a concrete plinth, the prefabricated timber facade is constructed and also formally treated, as a multilayered gown. It forms the autonomous surface of the buildings.

uploaded Rüthi through Add A Home.
Add your own project for the chance to be featured in Editor’s Picks.