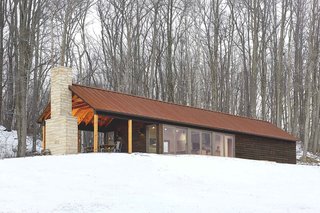 An architect crafts an off-the-grid cabin as a gift to his father. The father of architect Greg Dutton wished to build a cabin on the family farm, located within Appalachian Ohio and home to 400 heads of cattle. Dutton, of Pittsburgh and Columbus, Ohio-based Midland Architecture, presented this design as his father’s birthday present in 2012. Finished in 2014, the 900-square-foot cabin overlooks a valley and a 13-acre lake. It serves as a weekend house and guest residence. During the cabin’s construction it became clear that connecting it to the water and electrical grid would be prohibitively expensive. As a result, the cabin operates entirely off-the-grid, and its sustainable features became an exciting aspect of the design process for the architect and his parents. The cabin’s earthy and rustic exterior belies a number of strategies that lets the residence operate entirely off-the-grid.

Zachary Edelson uploaded Off-Grid Retreat through Add A Home.
Add your own project for the chance to be featured in Editor’s Picks.

Durability was an important factor in the building’s exterior. The architect selected materials, such as weathering steel for the roof and charred cedar for the siding, which would age gracefully. The deep browns and reds also blend into the forested landscape.

While a lengthy building lifespan minimizes environmental impact—for example, the charred cedar will last 80 years—an array of solar panels 50 yards from the house also allows it to operate independently from the electrical grid. A cistern collects fresh water from a nearby natural spring.

The retreat’s southern exposure maximizes sunlight with 24 feet of floor-to-ceiling windows. The sun’s warmth is absorbed and stored in the concrete floor, keeping the interior warm. Combined with thickly insulated walls, the cabin requires little additional energy, and has gone up to three days in winter without any electrical heating.

Douglas fir columns frame views from the porch, located just adjacent to the living, dining, and kitchen space. A sandstone fireplace bookends this space, creating a sheltering and warming effect.

The architect wanted the stunning views to take center stage, selecting a neutral color palette. The polished concrete, in addition to storing the sun’s warmth and passively heating the space, reflects sunlight upwards to illuminate the living room.

The bright ochres of the Douglas Fir beams and window framing accent the gray and white hues of the furniture, floors, and walls.

The kitchen island, also Douglas fir, showcases the material’s rich striations and color variations. Behind the kitchen are two bedrooms and a single bathroom. A large open air pavilion, built concurrently with the cabin, can be seen from the windows on the right.

The large open-air pavilion, also overlooking the lake, echoes the retreat’s timber construction and natural hues. It hosted the architect’s wedding ceremony in the year of its completion, 2014.