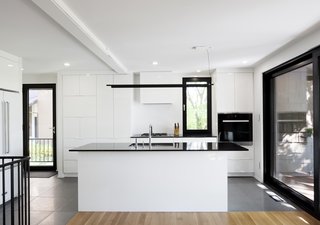 The Rue de l’Espéranto residence is a renovation project located in the borough of Sainte-Foy in Québec City, Canada. Originally built in the end of the 1960s, the house, which definitely possesses many architectural qualities, needed an update to meet today’s lifestyle as well as the owner’s needs. Designed by PARKA Architecture & Design and Guillaume Sasseville, designer and owner of SSSVLL Studio in Montréal, the project consisted in the reorganization of the common areas and the optimization of the traffic areas while preserving the unique architectural characteristics of the home as well as the beautiful original materials.

The layout of the common areas was modified in order to obtain a space that would be more open and that would allow the occupants to take full advantage of the surrounding nature and natural light. This was reflected in the enlargement of the fenestration as well as the demolition of the wall that separated the dining room from the kitchen. The latter, which used to be isolated and confined in a long but narrow space, is now more spacious, welcoming and open towards the dining and living room.

The ground floor of the home was also made into an open-plan which can be divided, if need be, by a bright yellow sliding door. As well as giving more character to the space, it offers great flexibility by allowing the occupants to customize the layout as they please.

PARKA - Architecture & Design uploaded Rue de l'Espéranto residence through Add A Home.
Add your own project for the chance to be featured in Editor’s Picks.