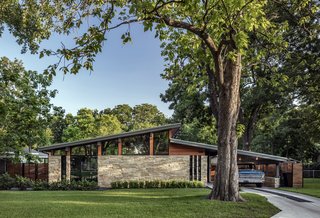 A balance of natural light, simple materials, and flows, are integrated with controlled views and atmospheric variation. This Central Austin house was remodeled in the spirit of the original Mid-Century Modern house, with an open plan, honest natural materials, and a direct connection to nature.

The design opens the house up not only by unifying the common areas, but also by literally raising the original roof. Through merely consolidating the service core and extending it as much as possible to the back, both public and private zones become more desirable. The kitchen is seen as part of the social space, opening up rather than part of the service core. This strategy allows a completely open planned public zone which allows a raised ceiling height with clerestory windows on the south, west and north sides. The raised ceiling maintains the original pitched roof geometry to stay harmoniously with the existing gabled roof in the private zone. The exposed roof structure helps to define each function and expanding beyond the face to connect to the outdoors while preserving privacy to the street, and the tongue and groove wood ceiling continues out to the soffit to visually dissolve the limits of enclosure. Furthermore, as an effort to bring the outdoors in, intimate patios are created for both public and private areas.

Matt Fajkus Architecture uploaded Re-Open House through Add A Home.
Add your own project for the chance to be featured in Editor’s Picks.

When Austin-based firm Matt Fajkus Architecture was tasked with renovating this classic midcentury home, they sought to open up the interior—not only by unifying the common areas into an open-plan layout, but also by literally raising the home's roof. This strategy increased the ceiling height on three sides of the home, allowing for the insertion of clerestory windows to create a bright and airy open living space. "The raised ceiling maintains the original pitched roof geometry to stay harmonious with the existing gabled roof in the private zone," explain the architects in a statement.

The new open-plan living/dining/kitchen space benefits from the raised ceiling height and the addition of the clerestory windows on the south, west and north sides.

The renovation opened the kitchen to the living space and added an island for increased prep and storage space.

The natural material palette of stone, wood, and polished concrete is enhanced by views of the surrounding greenery.

The view from the kitchen.

The dining space. The Joules midcentury modern chandelier was ordered from Etsy.

The tongue-and-groove wood ceiling continues right out to the soffit. The beautiful graphic cement tiles from Cle carry over into the outdoor patio, further blending the indoor and outdoor spaces.

A private patio complete with an outdoor shower lies just off the master bedroom. The Cle tiles in the kitchen also feature here, unifying the outdoor space.

The renovation extended the back of the house to increase the home's square footage. It also added an additional bedroom with an ensuite bath, and the master bedroom received a new walk-in closet and sliding doors leading to the backyard.

The increased square footage and the outdoor patios are welcome additions to the home.

Re-Open House by Matt Fajkus Architecture | Before & After