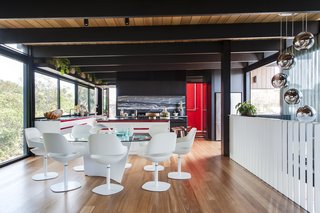 In a midcentury home in Victoria, Australia, an interior designer embraces color and a connection to the outdoors.

"It was a good-looking house from day one, really," says Andrew Parr, director of interior design at SJB, an architecture, interior design, and urban planning firm based in Melbourne and Sydney. Parr led the overhaul of this midcentury house on the Mornington Peninsula, south of Melbourne. It had good bones, including a skillion roof, exposed beams, and expansive windows. "The main vision was to make it engage with the natural environment," says Parr, via A Life Individual, a video series created by The Design Files and Space.

Take the new master bedroom. There, three walls of glass connect to the outdoors. Such a set-up made it important to install furniture that looks good from all angles. In a nod to '60s modernism, Parr chose the B&B Italia Tufty Bed designed by Patricia Urquiola. "The heavy quilting, the heavy plumpness to it, the low line of it—I think it's a classic of the future," he says.

Such was the approach to the entire Peninsula Residence's interior design—honoring the era from which it sprang while bringing it boldly into the future. Materials like cedar, steel, natural stone, and concrete provide an ideal backdrop for a judicious use of color, from the glossy red in a stairwell to the chartreuse upholstery in the living room. "Because the house has the soul of an old house underneath it, you have to reflect back to the time it was built," says Parr. "It sort of embodied...the optimism of Melbourne at that time, in the late '50s, early '60s, when people were not afraid of color and connection to the outdoors."

In a midcentury home in Victoria, Australia, an interior designer embraces color and a connection to the outdoors.