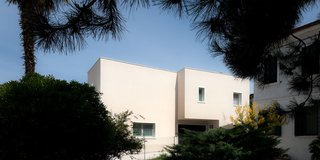 The plot is in a residential area of Padova, built around the first years of the 20th century which than grew over the 60’s and the 70’s. Villas of the 1900 and condominiums of the 60’s and 70’s coexists thus showing a strong contrast within this area.
A heavy congested road along the south side of the plot and small villas on the others sides surround the plot. Originally on the area there was a small villa built around the 1930. It was built on two floors and along the years it was built a new addiction to host the bathroom and the laundry room. The small interior spaces and the fragile structure determined the choice to demolish the existing building and to rebuilt it within the same shape plus adding an extension.
The plot shape, long and narrow, and the proximity of the other buildings limit the layout of the expansion area. The clients were very attached to the old building so they wanted that some elements could be reused to preserve its memory. The project started from many obligations but transformed them into strong points.
First of all we wanted to mark clearly the volume of the previous building while the extension inserts as a tall and narrow volume. The connection between the two volumes generates the spatial junctions on the interior as on the exterior. The interior spaces are organized around the staircase that leads to the rooms at the first floor through an ascending anticlockwise path. On the outside the entrance porch, at the end of the access path, marks the connection between the two volumes.
The obligation to have a terrace for the main bedroom was the opportunity to break the linear shape of the extension’s volume. That creates a system of movements on the west façade and on the one along the main street.
The design of the windows casings guarantees the contrast between light and shadow along all day. The use of these protruding casings together with the movement of the façades starts a dialogue with the adjacent buildings and sets up a continuity with the context.
The paving materials helps the natural drainage of the rain water and to reduce the urban heat island effect: grass has been placed on the west and south sides while draining pebbles contained into a honeycomb plastic cells, on the east and north side, guarantees the car parking without the scattering of the pebbles.
The structural system is composed by concrete and masonry walls. That allows to gain massive walls along the perimeter in order to achieve a good thermal lag on summer time. Insulation panels 15 cm thick along the exterior walls, rockwool panels 5 cm thick on the inside together with 12 cm thick insulation panels on the flat roof protect the house from the thermal bridges and reduce the sound transmission from the outside.
On the flat roof, the floating pavement works as a sunshade to prevent summer heating and at the same time supports the photovoltaic panels. The insulation system together with the photovoltaic panels, the heat pump heating system and the mechanical ventilation heat recovery system allows the building to reach the label of energy performance “A4 energy class” in the energy efficiency rating.

EXiT architetti associati uploaded PD House through Add A Home.
Add your own project for the chance to be featured in Editor’s Picks.