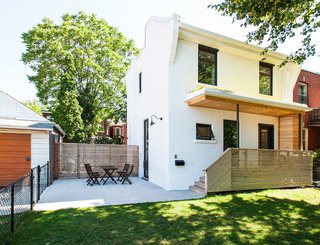 In October 2014, Tom and Christine, the co-owners of Solares Architecture and real-life couple, renovated their family home in the Queen West/Roncesvalles neighbourhood of Toronto. The main goals of the major overhaul were to minimize energy waste and maximize use and livability of the 900 sq.ft. home. The previous home was dark and cramped, at two storeys tall with a small unfinished basement. The basement was underpinned and finished as a self-contained apartment, which the couple rents out, and an open concept main-level design incorporates large amounts of clever cabinet storage to create a cohesive communal space for the family to share and enjoy. A small powder room was added to the stair's mid-level landing, and the second floor includes a full bathroom with laundry facilities, a children's bedroom, playroom, and the house's master bedroom.

On the porch's front overhang, the couple planted a green roof, lush with native foliage. The final touch was painting the old, mismatched exterior brick a bright, clean white.

As Solares specializes in energy efficient, passive housing, Tom and Christine’s joint expertise in their field paid off - their home, with a previous, inefficient Energuide rating of 38/100, scored an 83 once finished.

Solares Architecture uploaded Our House through Add A Home.
Add your own project for the chance to be featured in Editor’s Picks.