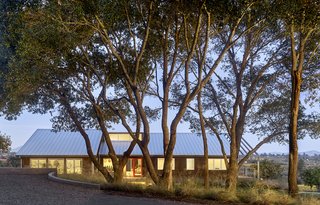 Orchard House is a modern, sustainable interpretation of vernacular agricultural design. The massing is direct and reductive, using geometries familiar to utilitarian and modern forms. The elongated gabled volumes sit atop a wood plinth and merge with the sloping site through steel trellises, bridges, stairs, and landscape interventions. The open trellises, skeletal carport, and weathered decking recall varying states of transformation and renewal germane to an agrarian landscape.

The owners wanted the house to have a more vernacular appearance, in keeping with the nearby farms and stables, and also to communicate its own time. The emotional connection to the land is communicated through architecture that speaks to place. The original multi-gabled roof was streamlined into two ridges, one belonging to the former garage to the north and the other elongated over the living spaces towards the south. Materials and details, such as board-and-batten-siding, have traditional origins but are also read as modern textures.

Redesigning the house on top of the existing foundation and maintaining usable structure presented several challenges but helped reduce construction costs. The priorities were to find additional space; increase connections to the outside; and redefine the building’s appearance. The existing house was designed and built by the original owner. It had a discontinuous asphalt shingle roof with multiple slopes and an enormous deck. The existing structure was weak with many roof rafters too widely spaced and undersized. Shear walls were minimal and some parts of the foundation too short. The asphalt driveway sloped down to the garage without proper foundation drains and there was some water damage. The interior had dark brown trim and paneling, a boulder-clad corner fireplace in the sunken living room, and other dated finishes. Despite high summer temperatures, there was little shade incorporated into the building design. The domestic landscaping adjacent to the house was suburban and out of place in a rural, agricultural area.

Converting the two-car garage to interior space and squaring off the southwest corner yielded great returns with minimal new construction. The garage became a bedroom with loft, bath, laundry and pantry hall. The rear shear wall of the former garage separates the pantry from the kitchen. The infilled corner became the “extra room,” with a place for the TV away from the living area, a quiet zone for study, and overflow space for slumber parties. Removing the warren of halls in the former bedroom and bath areas returned more usable space to the floor plan. The original entry, living, bedroom and bath areas remained in their existing locations with a better-organized plan for spatial efficiency, more daylight and clarity of concept. The former interior, corner-kitchen was relocated to the north, allowing for a direct connection with the deck and view of the pool, while the recovered space became a breakfast/game table area. The fireplace was moved from the corner to the center of the south wall if the living area, becoming a focal point opposite the exterior dining doors. Space captured under the front overhang was incorporated as a mudroom and foyer.

The interior layout informed the site plan by extending interior circulation axes outside. While the primary east-west (cross) axis runs from the entry to rear deck and north-south (long) axis from the kitchen to bedrooms, there are secondary axes which serve the support areas with equal consideration. The “wet hall”/pantry leads directly to the pool and mudroom, providing a zone for outdoor clothing and toys. A small east-west cross axis leads from the kitchen to guest suite providing just enough separation for privacy but also connecting views from front to back. The multiple views from each area make a modest footprint feel expansive.

The interior is open and bright. The heart of the house is fluid with individuated, but interconnected, entry, living, dining, kitchen and play areas. A secondary hall with mudroom, pantry, laundry and shower forms a dedicated “wet axis” connecting the entry and pool and helps to keep the main spaces clean and uncluttered. Private areas with bedrooms and baths are tucked away through short hallways. Long interior axes and enlarged wall openings orchestrate views to the outside. Daylight and cross-ventilation are plentiful on all sides of the house.

Integrated architectural and landscape designs create a unified site narrative. Transitions from native California woodlands to cultivated landscapes and domestic gardens inform Longwell MacDonald's landscape design approach down the hillside slope. At the top of the driveway, an open carport and heritage apple trees frame the first view of the house and spectacular panorama beyond. Vineyards and orchards in the foreground tell the story of Sonoma’s changing agricultural economy. Staggered concrete steps replace the former asphalt driveway down to a new gravel path lined with lavender and drought-tolerant grasses. Entry to the house begins on a bridge which spans over a sudden drop in grade. A second bridge connects the house with the pool surround on the north side. As the land continues its downward slope, the wood plinth is revealed with architectural and landscape stairs connecting house and earth.

Cary Bernstein Architect uploaded Orchard House through Add A Home.
Add your own project for the chance to be featured in Editor’s Picks.

Orchard House is a modern interpretation of the Californian farmhouse. Cary Bernstein Architect thoughtfully integrated architectural and landscape elements that mirror the neutral palette of the surrounding countryside.