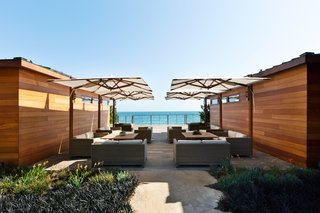 Set on the Pacific Coast Highway, a midcentury beach motel is now an exclusive, Japanese-style hideaway with meals delivered from Nobu Malibu next door.

Oracle co-founder Larry Ellison, celebrity chef Nobu Matsuhisa, actor Robert DeNiro, and producer Meir Teper own the new Nobu Ryokan brand, which is inspired by the traditional Japanese inns that give the hotel its name. Studio PCH, Inc., together with Montalba Architects and TAL Studio, transformed the 1950s-era Casa Malibu Inn into a high-end, beachside retreat with 11 suites and five oceanfront bungalows.

No two suites are the same, and the modernized rooms are artfully designed to incorporate Japanese elements, such as tatami mats and shoji screens.

"There is a moment when the sun enters through the bathroom skylight when you can feel the stillness and calm settle over you," says Studio PCH founder and principal Severine Tatangelo. "That’s the sensibility we aimed to capture in the rooms, patios, and gardens that really makes Nobu Ryokan a retreat destination."

A secluded entrance opens onto an ocean-facing courtyard filled with native California plants including trumpet vines, which were prominent in the gardens of the site’s original Casa Malibu. Guests can wander through the garden’s meandering paths, which lead to an intimate enclave with a grand outdoor board-formed concrete fireplace.

The inn’s central ipe wood deck offers expansive views of the Malibu pier to the west, Palos Verdes Peninsula to the east, and the seemingly endless Pacific Ocean to the south. The design emphasizes the harmony of the indoor and outdoor spaces through the reflections of nature in the architecture, and the balance maintained between the building, the color palette, and the energy flow—culminating in a serene and zen-like experience.

"With the interior rooms, I wanted guests to feel an incredible sense of serenity and one of decompression. I want them to feel a lightness in their state of mind with a beautiful sense of removal from the larger dynamic qualities of the Los Angeles area. The hotel is located on a magical edge, where land and sea meet, in a wonderful serene cocoon that creates a completely private and discrete getaway. The things that speak the most loudly here are subtlety, restraint, quiet elegance, and reserve," says Todd-Avery Lenahan, owner and founder of TAL Studio.