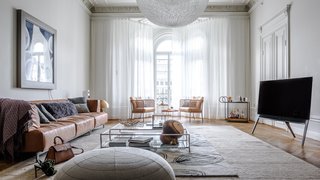 Long before the Swedish design trio Claesson Koivisto Rune reconfigured this 19th-century stone edifice into an eccentric modernist hotel, the site had achieved a certain notoriety; after a spell as a private residence it was home to a bank where, during a 1970s robbery, the term “Stockholm syndrome” was coined. Later it was pressed into service as a high-end apartment complex, and brands like Marimekko and Acne occupied its retail space. It’s in connection with its current incarnation as the Nobis Hotel, however, that we’re moved to take an interest — what’s otherwise a fairly conventional luxury hotel is elevated to something higher, thanks to the contrast of the buildings 19th-century patina and CKR’s contemporary Scandinavian design sensibility.

The color scheme and the lighting design are intended to work in tandem. Referred to as “Scandinavian dark blond,” the palette is toned-down and discreet, inspired by the low, off-angle light observed during the Swedish winter. The furnishings enhance this natural aesthetic, with materials sourced from wood, stone, and wool, while subtle patterns suggestive of abstract and organic forms grace the wallpaper and carpets.

Alongside these modern elements is a generous helping of Stockholm history. Much of the original hotel’s interior, like the former bank conference rooms paneled in dark oak and ornate stucco, is under the watchful eye of the Swedish National Heritage Board. For all its design distinction, and despite the repurposed steel reception desk or the automated cellphone check-in, the Nobis is still in some respects a classic luxury hotel.

All rooms have views of the city or the hotel’s atrium, and bathrooms are sheathed in floor-to-ceiling Carrara marble. The lounge is the focal point, with its lofted cathedral-like ceiling rising high above, and its easy access to the in-house dining and drinking options.