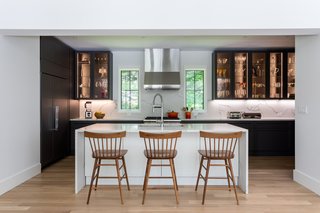 The family decided to move out of NYC after the birth of their second son in search for a place that would fit their active lifestyle and passion for sports/outdoors. The search was centered around finding a town/neighborhood with big lots (2 acres plus), lots of green and privacy. After a one year search they chose New Canaan as their new hometown.

The family loves to cook together and make meals the center of the family social interaction, so having a beautiful and functional kitchen with an open lay-out was a must. In addition, the family has a very active lifestyle. One of the parents runs Triathlons and the kids like to spend time playing soccer and riding their bikes. A great outdoor space and a flat land were also important for that matter. On top of that, although the main social areas would ideally have an open concept, both adults work part-time at home so there was a need for a separate space to serve as a home office and a triathlon training area for the winter.

The challenge for them was that most available properties in the area were bigger than what they needed and had formal entertaining areas (such as living, dining rooms), which were not appealing to them. The family also wanted a contemporary design aesthetic and most available properties had a colonial style. They found an old cottage and barn in urgent need of an update but with lots of potential. The cottage was built in the 30’s and the barn addition in the early 90’s and, while charming, the house had no defined design style. With one of the parents being an interior designer, they were not afraid to go for a full gut renovation. This would allow them to get the desired lay-out and a modern aesthetic.

The kitchen was extended, an old office space turned into a playroom, both were open to the main family room/dining area creating an integrated family area with space for cooking, eating, playing and chilling. The old and oppressive formal living room underwent the biggest transformation: they added new large windows, opened the ceiling to expose the beams and turned the space into a cool home office/gym combination with great views of the garden. The family finalized the decor with some locally made furniture pieces and artwork from Brazilian artists (were they are originally from).

After spending their first summer in their new home, the family couldn’t be happier with their new life surrounded by trees and delicious home made meals.

Veronica Decca uploaded New Canaan Home through Add A Home.
Add your own project for the chance to be featured in Editor’s Picks.