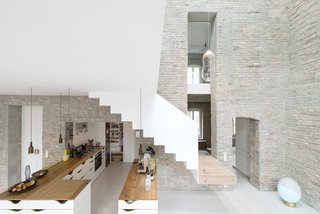 Built in 1844, this 2,700-square-foot house—which once belonged to a town miller—is transformed into a modern family home with high ceilings and an unusual open-plan layout.

The oldest building in the peaceful tree-lined neighborhood of Prenzlauer Berg in Berlin, Müllerhaus was also used as a police station and a workshop in the past before remaining vacant for many years.

The house was run down, with cramped interiors sectioned into multiple tiny rooms. Enter Hamburg-based architectural studio asdfg Architekten, who gutted the rooms and turned the space into a bright, voluminous three-level house with an interesting and generous floor plan.

The architects removed all the walls that were creating divisions throughout the existing property, but kept a single massive wall in the middle of the space. They designed the kitchen and sleeping galleries, and installed a white floating staircase that runs up the preserved wall.

Along with the dining and living spaces, the media zone and library are located on the ground floor in an airy, open-plan space.

The private areas such, as loft-style bedrooms and an office, are located on the first floor, while a guest bedroom, sauna, bathroom, fitness room, and storage area are situated in the basement.

Wood recycled from the ceiling beams of the old house were used for the staircase and kitchen interiors. The original brick walls were left exposed to retain the rustic, historical character of the house.