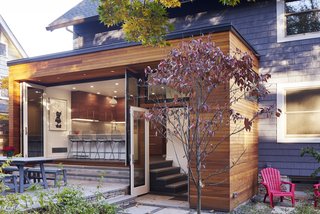 The center-hall house is a example of classic American residential architecture which is rooted in the country's rich colonial tradition. The goal for this renovation project, located in Montclair, New Jersey, was to find a design that was sensitive to this admirable historical style but thoroughly modern in its execution; to compliment, not copy.

The initial step, as is the case with all renovation projects, was to thoroughly analyze the existing conditions of the house. A few issues became immediately apparent. First, the kitchen, with its awkward and enclosed layout, was isolated from the living and dining areas. Next, a second bathroom was desperately needed to help sufficiently serve a house that had four separate bedrooms. Then, the maze-like layout of the third floor was hardly adequate for any purpose other than storage. And finally, the backyard was surprisingly under-utilized given house's need for more shared living space.

In the kitchen, the entry from the dining area was enlarged and the layout of the countertop and cabinetry was made more efficient. Large bi-folding glass doors were used to provide daylighting and access to an outdoor seating area, linking the kitchen to the backyard and essentially doubling its size during the warmer months. A mud room was added as a transition space between the kitchen and the backyard.

The third floor with its labyrinthine series of walls and closets was simplified and reorganized. A bathroom was added and the master bedroom was enlarged by extending it past the roof line to form a dormer. Additional windows were used to brighten the space.

The areas of the renovation that became visible from the exterior were treated to be clearly distinct from the traditional appearance of rest of the house. A warm-toned cedar plank sheathing was used to contrast with the much cooler original bluish-gray shake siding. The final result is a dialogue between the old and new; a timeless exchange.

Jeff Jordan Architects uploaded Montclair House through Add A Home.
Add your own project for the chance to be featured in Editor’s Picks.