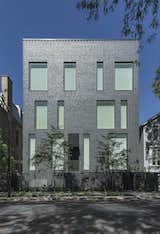 We were delighted to be asked by the owners of this new 8,000 square foot house to design a “minimal and abstract” building. To soften a prescribed box (mandated by the builder), a series of volumetric removals at multiple scales was undertaken: the back of the house was sliced (in plan) to create an angled glass plane oriented toward the southwestern sun; a volume was removed from the top floor to create an courtyard; and, smaller scale removals were developed such as extruding bricks on the front façade (visually removing material from the volume), removing bricks from the front fence, and perforating the main steel stair to allow light to trickle through the house from the courtyard on the top floor. The bond pattern of the brick façade consists of alternate bricks having their short sides (extruded headers) and long sides (stretchers) facing outwards, with alternate courses being offset. The brick pattern visually breaks apart the expansive front facade. A relatively introverted street facade (large windows with translucent shades) is contrasted by an extroverted all-glass facade on the back of the house. On the first floor, the kitchen, dining room, and living room are almost completely open to stimulate socialization. A grassy landscape connects outdoor and indoor spaces into a continuous 3D surface for a large family to live and play. This “hill” covers the garage with a small basketball/soccer field, and covers a subsurface gravel “sponge” that catches rainwater and protects the below grade living spaces from flooding.

UrbanLab uploaded Mohawk House through Add A Home.
Add your own project for the chance to be featured in Editor’s Picks.

Kitchen connected to back yard deck, garden and yard

Main stair made of perforated steel

Basement connects to back yard