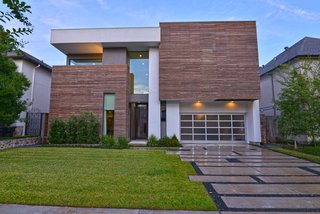 Exterior stucco was incorporated with a 1x2 offset shadow box in Brazilian hardwood wrapping around the façade. Horizontally-raked black brick was used in conjunction with the stucco and shadow box to create a dramatic contrast on the façade, highlighting the exquisite modern design.

An extremely oversized kitchen island with book-matched Dekton countertops is the focal point of the expansive kitchen. Two-toned cabinetry in both the kitchen and butler’s pantry using walnut and white lacquer creates a “tuxedo” look. The kitchen shelves also feature integrated LED strip lighting instead of traditional upper cabinetry.

The master bathroom is a showcase portion of the house with floor-to-ceiling windows providing natural light with an exterior shadow box offering adequate privacy. Additionally, the master bath features a three-dimensional tile wall, a skylight in the shower with a concealed rain head creating a “waterfall from the ceiling” effect as well as an external remote controller to adjust the shower settings.

John Leggett + On Point Custom Homes uploaded Upper Kirby through Add A Home.
Add your own project for the chance to be featured in Editor’s Picks.