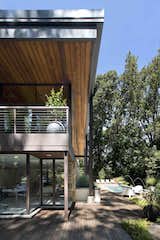 Exterior Side View with Outdoor Pool and Patio 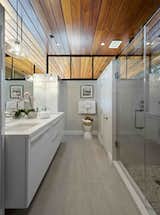 Exterior Front and Side View

Rill Architects preserved this 1962 midcentury modern summer home located on Gibson Island, MD, retaining much of the vision by the original architect, the late Ulrich Franzen (a disciple of I.M. Pei). The home boasts a thin roofline and eight columns of weathering steel made from the original owner’s employer, Bethlehem Steel Corporation. This robust frame allows for a lack of load bearing exterior and interior walls, in which Franzen took the opportunity to incorporate a continuous band of glass that runs along the entire perimeter.

When searching for a summer retreat, the current owners discovered the home along a wooded inland lot at the island’s highest point above the convergence of the Chesapeake Bay and the Magothy River. Over the years, the home underwent several renovations creating an introverted interior, with awkward walls and doors that closed spaces off from exquisite views. Rill focused their improvements on honoring the home’s relationship between indoors and out.

Existing steel beams, glass walls and stone designed by Franzen were maintained while further opening the interior to accentuate the wooded property's natural beauty. Aside from the bedrooms and bathrooms, which are shielded by an interior front stone wall, Rill Architects turned the entire floor plan into an open layout, providing a perfect setting for the home's minimalist design.

The first-floor master bedroom was reoriented to take advantage of the view from the windows above a stone wall. Two first-level bathrooms were renovated, along with a complete overhaul of the kitchen. A new open staircase took the place of the existing elevator to the lower level and the indoor pool was removed to create a guest bathroom and bedroom/office with access to a semi-private patio. The family room fireplace wall was redesigned and the rear of the lower level was opened to the outdoors.

Rill also restored the exterior while adding a new terrace and outdoor pool, further enhancing the connection between the indoors and outdoors—the essence of Franzen’s original concept.