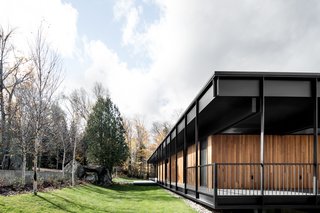 A 1940s lake house was given new life and an open-plan update thanks to architect Alain Carle. In the 1940s, the distinguished Canadian architect John Bland designed an elegant vacation house near Lake Masson in Quebec. Seven decades later, the midcentury gem was at risk for demolition due to soaring property values that made the land more valuable than the structure itself. Thankfully, architect Alain Carle stepped in. He not only restored the box home to its original glory, but also opened up its floor plan and improved its relationship to the surrounding landscape. “We’ve tried to push it beyond the limits of the original owner at the time of the construction,” he says.

Laura C. Mallonee uploaded The Phoenix through Add A Home.
Add your own project for the chance to be featured in Editor’s Picks.

Carle revived the home’s exterior by recladding it in fresh cedar planks, local stone, and black anodized aluminum. He also replaced the original windows — all damaged — and changed the sizes of some to respond better to the outdoors.

“In a way, we’ve grounded the house, incorporating topography as a main component of the composition from a more abstract box initial concept,” Carle explains.

In addition to adjusting the windows, Carle dislocated all wall partitions from the main structure of the house to create a more open feel. “This way, we’re going back to the mythical plan libre dogma of those days, as a wink to our ancestors,” the French-Canadian architect jokes.

The kitchen’s black countertops were cut from Nero Assoluto granite. The sink and faucet are from Quebec-based company Rubi. Appliances are from Wolf.

A dramatic black island is expertly balanced by a wall of white cabinetry and a refrigerator that blends perfectly. The kitchen’s black countertops were cut from Nero Assoluto granite. The sink and faucet are from Quebec-based company Rubi. Appliances are from Wolf.

The original design did not exploit the lower part of the house, so Carle added a bar and lounge area facing the lake at the ground level. He also installed water-based geothermal heating in the basement. “It allows the concrete floor to be heated and to generate most of the heating of the house, while a second smaller air pump assures a supplement of air on the ground floor and air conditioning for summer.”