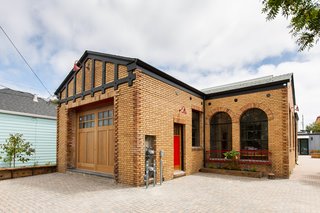 The residential adaptive reuse project inserts a new single-family home into a historic structure originally established as a Firehouse in the 1920’s. Utilized as a Firehouse until the 1960’s, when modern fire engines no longer would fit within the building, the structure found interim use as a neighborhood church while much of the original historic character suffered the effects of neglect. The restoration focuses first on the exterior condition, repairing the dark iron-spot face brick at the building corners, removing non-historic elements such as window screens, replacing glazing and deteriorated windows, and finally providing two new carriage doors at the front of building to match the former apparatus bay doors. On the interior, new concrete shear walls protect the building from seismic forces, and the new arrangement of spaces provides a well appointed two-bedroom configuration with two large interconnected livings spaces with ample natural light from the historic window openings.

uploaded Magnolia- The firehouse through Add A Home.
Add your own project for the chance to be featured in Editor’s Picks.