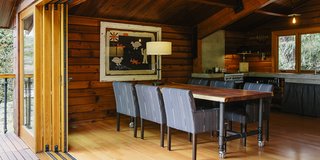 “It was like something out of a horror movie.” That’s how Brian Paquette recalls his first visit to entrepreneur Bruce Livingstone’s seaside vacation cottage on Vancouver Island in British Columbia. The damp Pacific Northwest climate had left the dark, shingle-clad house waterlogged, and vines were slowly creeping into the rustic 1940s structure.

Remote location aside, it was an unusual project for the Seattle-based interior designer. Over the years, Paquette had designed city homes in Victoria for his longtime client, but this house was different. In addition to a long structural overhaul in collaboration with architectural designer Randall Recinos—removing partitions, digging out and finishing the lower floor, and adding swaths of glazing to connect to the surrounding forest and the Saanich Inlet just a few yards beyond the door—Paquette had to reinvent for this wooded setting the visual language he’d previously developed with Bruce.

Starting with his client’s vision of a no-frills fishing shack, Paquette embraced the moody energy of the 1,800-square-foot space, pairing contemporary touches of poured concrete and industrial metal accents with the existing cedar paneling. Every material was considered as part of a system: The legs on the custom dining room table are made of the same steel as the outdoor railings, while its raw-edge top echoes the headboard of the built-in bed. Similarly, the hand-troweled floors on the lower level match the sleek glass fiber–reinforced concrete fireplace that’s surrounded by lounge chairs and vintage rugs.

“That’s just Bruce,” says Paquette. “He wouldn’t put on a bright white shirt and lots of colors and prints. He’d put on black jeans, a T-shirt, and Chuck Taylors and walk out the door.” In the house, this translates to sturdy pieces upholstered in tough Army green and gray fabrics and suede.
The clothing reference is an important one for the designer, who applies Coco Chanel’s famous advice to take one accessory off before walking out the door to his work on interiors.
It’s also a tool he uses to figure out what his clients really want. “I’m not asking them what color they want their couch to be. I’m asking them what they put on in the morning,” Paquette explains. “I’d rather not have them think about interior design and all the nitty-gritty of that. I want them to think about senses they want to activate, feelings and comfort levels, because that gets more to the root of how you want to feel.”

This strategy is part of Paquette’s highly personal approach to design, one that looks at each project as a holistic set of challenges to be tackled by a team of trusted collaborators. His projects are unlikely to include a long list of on-trend vendors. Instead, he works with brands like Workstead, Lawson-Fenning, and Zak+Fox—as well as contractor Dylan Conrad, who created custom built-ins down to a toothbrush holder in the bathroom.

“They’re people who are my friends, people I can text and call,” Paquette says. “If I have an idea, if it’s an upholstery thing, I talk to Glenn Lawson and we work it out and make a new piece. If I’m really psyched about a new textile or I’m traveling and I find a vintage fabric, I’ll just put it in the mail and send it to Zak with a little love note: ‘Hey, I thought of you.’” It’s these relationships, he says, that elevate interior design from “just filling a house” to creating a meaningful story.

“Being an interior designer is ninety percent psychology and nine percent paperwork, and maybe one percent creativity. If you have to work hard at the creative part, you’re probably in the wrong industry. It’s the other stuff that you should have to hone,” Paquette explains. “It’s less about spreadsheets and more about getting to the bottom of things.”

At the entrance, Bruce is joined by his son, Sozé, and dog, Izzy. The 1940s shingled cottage was renovated by architectural designer Randall Recinos, designer Brian Paquette, and contractor Dylan Conrad.

The master bedroom’s custom bed has built-in storage. The lighting is by Workstead.

On the main floor, custom sliders by Oakridge Windows &amp; Doors open to a table and chairs designed by Paquette and built by Conrad Contracting. The wood paneling on the walls was salvaged from the original structure and resawn; each piece was scuffed with fine sandpaper and coated with Projectol.

A Column lamp by Apparatus and concrete countertops join a Bertazzoni propane range. The brass pendant is by Workstead.

The kitchen was designed like a ship, with built-in storage created by Conrad Contracting.

A Workstead lamp is beside a custom sectional covered in Zak+Fox fabric.

A dock on the property makes for easy access to kayaking.

Conrad used sprinkler pipe material for the railings on the deck, which is made of ipe from West Wind Hardwood.