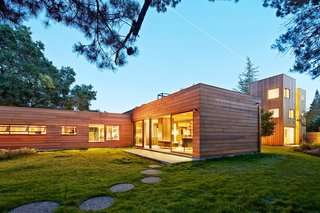 The energy-efficient Silicon Valley home that architect Dan Spiegel designs for his parents responds to their lifestyles, the site, and the local climate in a fresh interpretation of suburban housing.

Not every architect launches a practice by building a new home for their parents, but such was the case with Dan Spiegel of San Francisco-based Spiegel Aihara Workshop. The initial idea was to remodel the midcentury Cliff May home where Dan and his sister had grown up, but as the conversation evolved, they realized that it would be much more efficient to start anew.

The resulting residence in Menlo Park, California, is a long, low structure that recasts the traditional ranch house and farm tower as interlocking bars that divide private and public space and encourage energy efficiency. Placed throughout these zones, Nest Learning Thermostats enhance the home’s sustainable mission by intelligently conserving energy. As a result, Low/Rise House is a true reflection of his parents’ lifestyles, but also acts as a broader model for what suburban dwellings might look like—an utter departure from the McMansion.

"Rather than filling up each parcel with puffed up, monolithic volumes, we are trying to combine the super-high density and efficiency of urban environments with the long, low, breezy types of rural environments," explains Dan.

It was, naturally, a nerve-racking process at times. "There were nights I couldn’t sleep," says Dan. But the process of sharing articles and books, discussing models, and learning about his parents’ routines deepened his relationship with them in a kind of role reversal. "It’s a real privilege thinking about how to enhance the lives of people you love."

The previous layout forced the homeowners, Helen and David—professors of molecular biology and psychiatry at Stanford University, respectively—to pass by a series of empty bedrooms. The new configuration places guest quarters in a 30-foot tower and creates zones that can be essentially turned off to conserve energy. The dwelling shrinks and expands according to its usage, whether it be just the Spiegels, or when "the whole family comes home for Thanksgiving and fills every corner," says Dan. "It was an ecological benefit to have something that could adapt in small increments."

The build was completed in 2013—just in time to host a wedding for Dan and Megumi Aihara, a landscape architect and also a partner in their practice. Their newborn daughter, Aya, is the newest guest of the house. "It’s become a kind of benchmark for a series of important life events, and in many ways, the center for our larger family unit," says Dan.

Through an integral relationship between use, form, and material, the Low/Rise House responds sensitively to site, nature, and neighborhood, creating a new type of suburban living – both urban and rural.

The first floor consists of two long and narrow structures that intersect in an open kitchen, providing distinct programmatic areas and settling into the tree-lined landscape, allowing yards to surround and permeate each room.

Maximizing daylight is only one of the sustainable design strategies used in the Low/Rise residence.

The relationship between interior and exterior becomes crucial in the articulation of the residence.

In this sustainable home in Silicon Valley, the primary suite opens to a deck and fern garden with large, sliding glass doors.

“[Nest] is a system that begins to think for itself,” says David. “It’s an adaptive, learning [energy] control system that makes my life a lot easier.”

A compact and vertical guest tower is sited at the western corner of the lot amongst tall evergreens, allowing for a more private guest experience, more compact floor plan, and the ability to effectively shut off (socially and energy-wise) the guest spaces zone by zone during typical daily use.

Atop the 30-foot tower, a roof deck emerges through the trees, providing a unique vantage point of the structure below and the surrounding townscape.