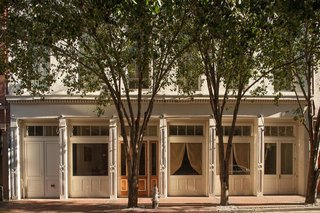 Loft 523 is an oddity in old-fashioned New Orleans — a boutique hotel in a completely modern style, one that would look at home in New York or London. Where many New Orleans hotels aim for a French mansion style, all antiques and ivy, Loft 523 is stark, minimal, contemporary. From inside, one could be forgiven for thinking of Soho; the fact that the French Quarter begins just a block away may make for a case of culture shock.

The hotel comprises eighteen studio loft apartments, rather than traditional hotel rooms — they are even numbered apartment-style (1A, 2B, and so on). Wide-open space is the order of the day, a welcome contrast to the typical New Orleans hotel room, swimming in antique furnishings and garish Louis XV fabrics. The look, rather, is clean and minimal, an homage to the converted commercial lofts of New York City.

This building was, in fact, a dry-goods warehouse, which explains the large scale — how many hotel rooms boast twelve-foot ceilings and full-length windows? The colors are subdued, in cream and grey, adding to the spare, calming effect. And the furniture and fixtures are equally modern — Herman Miller desks and Agape "Spoon" tubs, in particular, are fodder for design addicts' fantasies. Bathrooms are on a scale with the rest of the space, feeling a bit more like private spas, with a selection of Aveda bath products.

Seemingly a world away from the carnival of Bourbon Street, Loft 523 is a peaceful and meditative home away from home, especially for those whose taste runs toward modern design and loft living. At the risk of treading on a well-worn New Orleans cliché, this is as far from Anne Rice's vampire mansions as one can get — but if vampires are half as worldly (and sexy) as she says, they might just keep rooms at Loft 523 (but what to do about those floor-to-ceiling windows, we wonder).