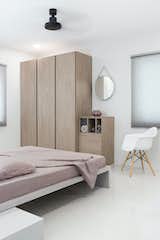 Living every day in a design museum, breathing design uncompromisingly in every detail, be it the furniture or tea canisters or textiles - that perfectly captures the theme when Microsoft designer Nithin Ismail started curating his own bachelor pad. Set in the city of Hyderabad in India, but unlike this heritage city’s celebrated Indo-Islamic architectural influences, the designer was more fascinated with Nordic minimalism. “I did not want to see it as interior design, but rather a celebration of product design”. The space in itself is drawn to the background as an open canvas abundant in white with black accents, drawing attention to a few objects that reflect the passion of its creators.

Going Nordic also meant going across borders for sourcing almost everything since the theme is a contradiction to most Indian designs. It was a journey of discovery of many retailers across the world who shared similar passions, and for many of them it was their first order to India. In fact there isn’t much at home that was picked from a brick-and-mortar store. “When I come back home after a passionate day at work, it’s often felt the same passion is carried home but on a different scale, from pixels to the physical space where I live”. Nithin Ismail is a Sr. Design Manager for Studio SAGA, the team behind Microsoft Edge on Windows. “I try to remember almost every designer’s name behind each and every detail that makes this space a museum of their creations, with gratitude and great admiration”.

Nithin Ismail uploaded Living in Monochrome, far away from Nordic lands through Add A Home.
Add your own project for the chance to be featured in Editor’s Picks.

The long hallway is an open plan with dining and living area combined, characterized by a large single piece sofa in grey velvet. The room is split by a square table in the middle with grey frosted glass and lean metal supports, adorned by four different chairs from Eames’ classics. The black La Stanza Dello Scirocco fruit bowl designed by Mario Trimarchi for Alessi is an art piece abstracted out of cards in an unstable balance, complimenting the table top. The London label Buster & Punch is admired for injecting a strong attitude towards craftsmanship in extra ordinary objects made for everyday use, complimenting the black and white decor with pendants and dimmers machined out of solid brass which gracefully ages with time.

Qlocktwo by Biegert & Funk makes you stop and look at time in a new dimension. The black surface of the clock in a perfect square contrasting with a clean white wall frames a perfect backdrop for the living room. The ceiling fans are minimalist expressions resembling simple geometric extrusions of form. The Pensi fan by The Modern Fan Company is named after its renowned Spanish designer Jorge Pensi.

The other end of the living room features an Eames Lounge alongside the playful Hello Lamp from Normann Copenhagen. The loose lines of the Hetkia Moments mural by Maija Loukari for Marimekko characterises a bit of chaos and contrast for the minimal space.

The black painted walls provide a dramatic backdrop along the hallway that splits the living room mid way. What's on shelves is an extremely selective curation, adding a hint of pastels to the overall theme. The Wall-E perhaps add the only bright hue in this space.

There is a certain elegance in the randomness created by Muuto dots on one of the living room walls, the diversity in form and materials of the objects chosen, and the purpose behind. The Hanging Vessel fromMenu switches between a planter or a storage for stationery, with the carbon semi-circular vessel laying flat against the wall. Paired with a Bang & Olufsen speaker beautifully machined in Aluminium, a pair of sneakers and a jacket in grey mélange, with one dot left bare to celebrate its own design.

"I studied Product Design at National Institute of Design in India, which is often regarded as Eames school, founded by the designer couple Charles & Ray Eames. The space I wanted to live in wouldn’t have been complete without a few of Eames' classics. Quite contrary to where one usually showcase the Eames bird on their shelves, it sits along my bedside waking me up to inspiring mornings every day”.

With an ambiguous sense of digital time in living room, the master bedroom features analog minimalism with the Stelton Time wall clock designed by the German design duo Jehs+Laub. The clock’s minute arm is linked with and forms the clock’s face, casting a brilliant shadow behind. The absence of a traditional clock casing creates an illusion of it floating on the wall.

The master bedroom flooring is inspired by old church floors, with painted black floor boards and broken surfaces giving the room a rustic contrast to the satin white and black walls. The beds by Gruppo Euromobil in both the bedrooms feature a simple construction in a headless design with the plank directly resting on low sideboards, painted in neutral pastel tones and adorned by black linen. Light enters the room creating an interesting silhouette through the cellular window shades from Hunter Douglas.

The triangle clothes hanger from RoomSafari reminds a musical instrument because of its triangular form and the missing hook, becoming as integral an element as the closet space. The small folded shelves by Muuto play a supporting cast, neatly tucking away a few everyday use stuff in the closet.

Linen Tales from Lithuania makes any room cozy with their natural linen in muted pastel tones. The hanging mirror by Hay is a playful and modern take on the classic strap mirror and blends with any theme. The Folded Vase by Amanda Betz for Menu atop the side drawers, admired unadorned for its raw beauty and earthy pastel clay.

The aesthetics of Norm Architects is minimalistic, functional and meets real-life needs. Even the dust bin designed by Jonas Bjerre-Poulsen and Kasper Rønn of Norm Architects for Menu may incite receptacle envy. The glossy white lacquered steel bin is matched against a black wall along the entryway to the kitchen. The Wardrope designed by Veronica Wildgruber and Susan Stofer for Authentics has an interesting design with a polyamide rope hanging from the ceiling and metal hooks sliding along it. The beautiful Veljekset pattern kitchen towel by Marimekko was a flawless addition on these hooks. Marimekko, the Finnish label that inspires with their bold use of colors and patterns, creates a striking contrast with the black & white Räsymatto pattern by Maija Loukari, expressed through various materials and objects at home, from textiles in kitchen to ceramics in living room to floor mats in bathrooms.

The narrow kitchen highlights a ceiling concealed hood from Falmec, overlooking a black granite countertop with the domino mix of barbecue + gas + induction hobs from Siemens, sitting atop handle less grey wood cabinets. On the open shelves, the cups are characterized by Japanese brush strokes and Finnish form, designed by Norm Architects for Menu. The vase by Agnes Fries for Normann Copenhagen features contrasting brush strokes in black over a clean white form, and adorns the top shelf along with beautiful black lilies to go with. Among other details are the grey Birillo dispenser from Alessi for soap, the Tumbler Clock by Menu as the kitchen timer, and adding to the green is the Cacti from Hay Design overlooking the small window.

The Folded shelves by Johan Van Hengel for Muuto were inspired by the show-play of layers, two of these versatile wall mounts in black and grey paired against the solid black back-wall in kitchen. The magazine fold holds an equally interesting cookbook to try out, ‘The Designer’s Cookbook’ indexing recipes by colours. The award winning broom & funnel dustpan by Polish designer Jan Kochanski for Menu Design is so simple in it’s core idea, an object you would enjoy using as well as being a part of the decor. Balancing the composition is a black and white Siirtolapuutarha ceramic plate from Marimekko at the center of the wall.