Located in a quiet street, this project takes advantage from an abandoned building of 1920

The windows were renovated with its original shape

Original materials were recovered such as patterned azulejo floors, brick walls and railings 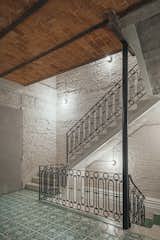 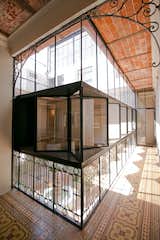 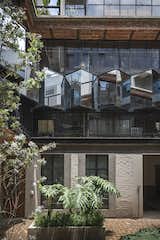 The mirrored glass creates a game of reflections between the old and new elements. 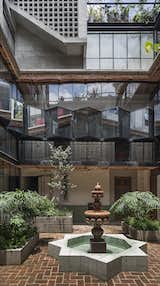 The central patio acts as an introspection space 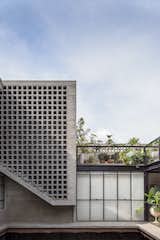 A concrete prism outstands from the patio 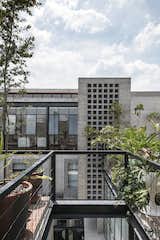 The concrete volume creates a contrast with the existing structure

The free height of the apartments allows a great entrance of daylight and ventilation.

Mirrored windowpanes in different angles helps to restore some privacy

Located in a quiet street in one of the most emblematic neighborhoods in Mexico City, this project is an intervention that has its roots on the understanding of the urban and social dynamics in Mexico City.

Lirio 7 has an interesting history; as an Art Déco building, originally housed public baths during the 30s, then in the 50s became a sanatorium, and before its abandonment, it was the headquarters of a security company. Considering this conditions, we took advantage from an abandoned building without any recognized heritage value by local authorities, to restore it and offer a specific model of housing that recovers the historical value of Santa María La Ribera neighborhood.

The design process is based on the concept of a central patio and its perimeter circulation, which was adapted into a new layout to create 12 new apartments where the main corridor becomes part of the home. In this type of buildings, this circulation is a public place and the challenge on making it private leads to define an enclosure that plays with the visuals.

The dwellings are arranged around the patio, orienting their view to it, which is considered as a place of introspection, not so much as circulation. Concrete elements of different heights acts as planters, dampen the sound of the water from the recovered fountain and support the discourse of circulations, interposing themselves to the visuals, again to guide and give privacy to the user.

Each of the houses therefore has ventilation and daylight entrance. The first and second floors have a greater free height, typical of the original construction moment, allowing a greater volume of use of spaces. The third level, from the 50s as well as the new structures implemented on deck, maintain a standard height more like that the required by current construction regulations.

A perforated concrete prism, outstands from the patio's façade, creating a visual contrast without stealing it protagonism. With a different materiality and density from the rest of the project, this volume patches the view from the outside, creating a light and shadows game towards the last apartment, and allows the user to enjoy the views.