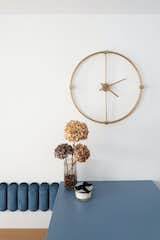 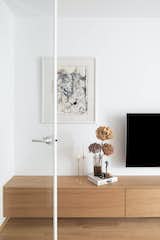 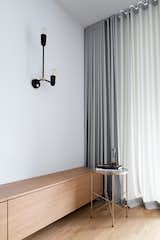 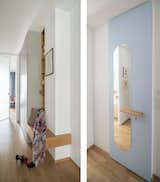 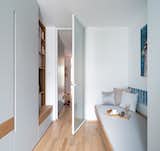 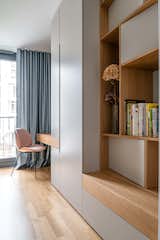 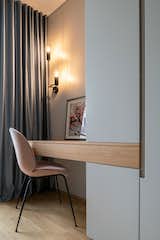 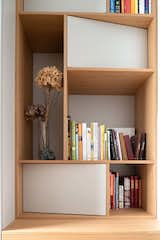 Bedroom and the dressing room

Dressing room and a rotating mirror 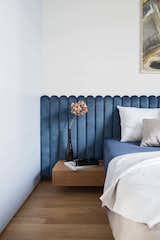 The client wanted to keep her 62 sqm apartment bright, seemingly warm and simply shaped, with some addition of blue which she adores so much. That is why the architects sought conceptual inspiration from the period of Bauhaus and many times overlooked Elieen Gray's interiors. With its clean lines and functionality her pieces were nevertheless designed with comfort in mind in addition to a great deal of feminine elegance and glamour.

The interior was designed by carefully playing with volumes and voids according to their function while dematerializing them and maximizing their use. As such the design is consistent through the whole apartment – each full element is useful and intended for a specific purpose and each void is formed with the knowledge that it can soon be filled. The latter basically functions on its own, but if the owner fills it with objects such as paintings, statues or some useful pieces such as fashion accessories and dresses, the objects are placed in a functional frame or compositional context and do not act foreign.

At the beginning the architects from idea:list studio rearranged the kitchen in the living space from an L shape design into two parallel lines that gave them additional storage space. The kitchen island formed as a volume that rests on a long storage bench that connects the kitchen part and the dining space and with its reduced lateness opens up the room and lets light seep through. This new orientation of the kitchen and consequently also the dining part enables circular visual communication between the latter two and the living room, perfectly fitting into its user’s living habits. Perfect counterbalance to an elegant kitchen in two shades of blue lies in furniture covered with oak veneer. Consequently this volumes combined with different colours and materials form a starting point upon which other spaces are designed. The latter is manifested in different functions of assembled volumes and colours.

The work area and guestbed are represented in the cabinet as voids and are highlighted by wooden lines that visually continue in theform of a bench throughthe hallway and into the living space where they manifest as a cabinet under the television. The empty frame in the bedroom lets light pass through to the wardrobe while still dividing the sleeping part from the dressing room and in addition serving as a hanger and a place for a rotating mirror.

Clean minimalistic lines are complimented by rounded shapes as details that make the space more elegant and sophisticated. This shows best with the shapes of mirrors in this apartment which have a dual function – for examplethe mirror in the bedroomthat simultaneously serves as storage space for jewellery likewise the mirror in the hallway (together with the blue lining) also serves as a cover for the installation cabinets, as a shelf for hanging keys and finally it acts as an introduction to the aesthetics of the apartment (and its owner) to every visitor. The luxurious deep blue velvet on the rounded upholstered backs of benches and beds adds a desired elegance to the space, while carefully selected fabrics in curtains and cushions further enrich it with different textures and delicate contrasts.