The “Sassi” of the Southern Italian UNESCO World Heritage City of Matera are ancient cave dwellings dug out of the region’s limestone rock, which have been used by humans from as far back as 7000 BC.

The limestone rock is known locally as “tufo” of tuff.

In some parts of the ancient city, the streets run above these subterranean cave homes.

In Sasso Barisano, one of the two Sassi districts in Matera, just off a historical street called Via Fiorenti is La Dimora di Matella – which translates to “The house of Metellus” – a cave house that has been transformed into an atmospheric, four-room hotel and spa that beautifully melds modern design with history and nature.

“All spaces, both internal and external, were restored and designed to accommodate all the new features of the hotel with harmony and comfort,” says Marina.

Manca Studio hired skilled workers with experience in historical restoration to recover the cave dwellings and repurposes the chambers into comfortable and elegant public areas and four intimate and romantic suites. 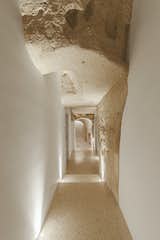 The single-level hotel and spa is spread across 3,229-square-feet, and includes a reception hall, a spa, and four bedrooms that all have access to an outdoor terrace. 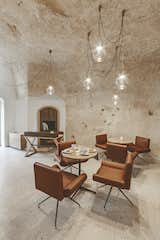 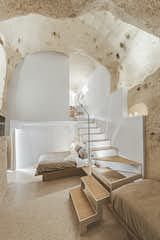 All four guestrooms look like natural grottos with ceilings as high as 15-feet.

The spaces are engulfed in tuff and sections of plastered perimeter walls.

The hotel was conceived as a box that contains layers of the past and expressed the roots of its unique heritage site.

Minimal furnishing conveys an aesthetic that is neutral and linear 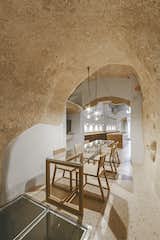 This minimalism highlights the curves and textures of the cave walls and ceilings. 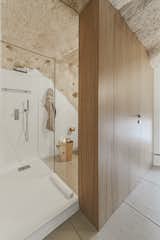 The result of Manca Studio’s precise and careful restoration is a space that balances lightness and modernity with the gravitas of ancient history.

An ancient, limestone grotto in the UNESCO World Heritage Site of Matera has been transformed into a chic boutique hotel.

The city of Matera in Southern Italy is known as la Città Sotterranea, or the Subterranean City, and for good reason—inhabited since the 10th millennium B.C., its historical center is made up of a series of limestone caves. This area, known as Sassi, was declared a UNESCO World Heritage Site in 1993.

With the goal of creating a dialogue with the context and history of these caves, architects Marina and Alfredo of local firm Manca Studio redesigned and refreshed the interiors of a subterranean house and transformed it into a sleek, four-room hotel and spa named La Dimora di Matello.