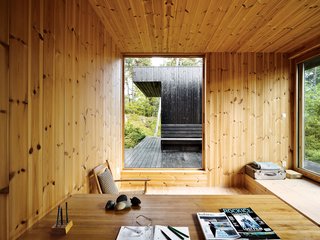 An architect recasts a 1960s artist’s retreat in southeastern Norway.

Architect Irene Sævik’s summer retreat lies an hour’s drive from bustling Oslo. In true Scandinavian form, principles of simplicity and respect for nature govern the house’s design. Originally built in the 1960s by the Norwegian artist Irma Salo Jæger, the 430-square-foot cabin sat unoccupied and in partial disrepair for years before Sævik purchased it and decided to expand. “It had an appealing expression that inspired me to develop it further—to transform the site and make a stronger connection between house and landscape,” Sævik says. She added an office, bedroom, sauna, and bathroom in a series of individual pavilions joined by decks, bringing the total area to just under 970 square feet. “I tried to make a place where one could stay alone, as well as a good place to be with friends,” she says.

Diana Budds uploaded 430 Cabin through Add A Home.
Add your own project for the chance to be featured in Editor’s Picks.

Sævik compares her house to a contemplative hideout. “It’s very quiet,” she says. “You can concentrate and let thoughts fly.” Her favorite summer pastimes include reading, painting, drawing, yoga, and “just sitting and feeling the forest,” she says.

The 1950s desk in the office is from the original house; the chair is by Aksel, a Norwegian furniture company. Sævik designed the pencil holder.

Regain focus and boost your productivity—here, we walk you through seven steps to soundproofing your home office.

Sævik designed the wood tub in the bathroom, which features an adjacent sauna. The Inxx A5 faucet is by Mora.

The house is divided into three sections connected by a series of outdoor galleries. “When I walk from one room to another, I have to go outdoors and feel the weather and nature—rain, cold, and sun,” says Sævik.

Instead of emphasizing the expansive panorama of oak, pine, and aspen trees, the house frames select views—a move inspired by Japanese design.

The interiors are clad in white-glazed pine, a contrast to the black-stained facade. The brick fireplace is original. Near a Polder sofa by Hella Jongerius for Vitra is a coffee table of Sævik’s design. The rocking chair is vintage and came with the house.

A section of the roof reaches over a rock outcropping—a detail that visually connects the house to the landscape and offers a handy way to climb up to the roof deck without using a ladder.