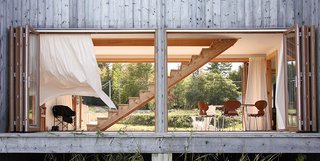 The vacation home of Martin and Harriet Roth lies on Otnabog Lake, near the St. John River, in the tiny hamlet of Queenstown, New Brunswick. Although just an hour from Fredericton, the province’s capital, the place feels exceedingly removed and is sparsely populated (about 100 inhabitants). But despite its isolation, the decision to build there was easy. The land belongs to Harriet’s family—it’s where she spent her childhood summers—and the couple love the 180-degree change it provides from their hectic lives in Berlin.

Their goal was to erect a simple wooden house that took its cue from agricultural vernacular. “There are so many beautiful barns in this area—they’re more like sculpture,” says Martin, who recently retired as director of the Victoria and Albert Museum in London, where the couple lived for a time. “Our idea was to combine style and architecture in a modest way,” adds Harriet, an art historian and author. The final cost was about $150,000.

With the help of a well-known German architecture critic, they found the Berlin-based architects Johannes Modersohn and Antje Freiesleben, who have created a number of similar-style homes. The four quickly agreed on the basic concept: two barn-like sections joined by a hall that converts to a breezeway. A simple wood staircase would connect the two levels, creating what appears from a distance like a giant Z.

A neighbor and craftsman, Grant Pye, served as contractor for the three-bedroom house and did much of the construction himself, working with a builder from the next town. “He looked at the plans and said, ‘I can do it,’” recalls Harriet, who has known the Pye family for years. In addition to construction, Pye handled the local filings and inspections.

The project took three years to finish, as work could proceed only in warmer months, but the result was worth it. The architects won a Best Architects 17 gold award in Europe, and the residents and their three grown children are thrilled with their new getaway. “It was always our dream to do something thoughtful, something meaningful, when we finally built a house,” says Martin. “This fulfills that for us.”

uploaded House R through Add A Home.
Add your own project for the chance to be featured in Editor’s Picks.

Architects Antje Freiesleben and Johannes Modersohn combined two barn-like wings and a large connecting hall/breezeway for a retreat in New Brunswick. A space between the concrete foundation and the house’s raised wood platform allows the snowmelt to pass through in spring. The 21-foot-wide accordion doors are by HFBB Holzfensterbau Bernau and were shipped from Germany.

Several types of wood were used to build the house, including red pine for the floors, white cedar for the porch, and black spruce for the siding.

White pine from the Roths’ own property was used for trim. Some of the wood was left unfinished, as were other elements. “Under the porch roof there’s no cladding,” notes Freiesleben. “If you had more money, you’d hide it, but it’s not necessary or even desirable.

“One of the reasons we built the house was to make a statement not to move away, but to do exactly the opposite. In a small community, when two people leave, it means a lot.” Martin Roth, resident
Illustration by Lohnes + Wright