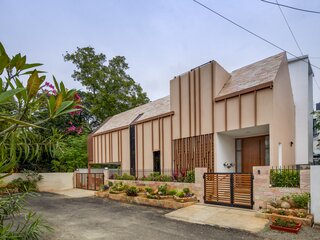 In a plot measuring 65 feet x 85 feet on a dead end road, was the site with an existing 50 year old house .A new contemporary family home was designed to replace an existing traditional mid century house. The house was designed to be introverted with the objective to wrap a private green space within the plot and to organise living spaces around it. Gifted with a reserve park adjacent to the site, the design took the opportunity to use the canopies of the park's large trees as borrowed landscape. The C planned house has its internal garden court designed adjacent to the park site. The nestled landscape allows the clients to use the private garden as a physical extension of the dining space and a visual extension of the bedrooms and living area. The use of varying internal volumes, water feature and landscape greatly helps to reduce the internal temperatures.

As the name suggests the project was completely built using materials besides brick. Glass fibre Reinforced Gypsum (GFRG) panels were used to construct both the walls and the roofs of the structure. GFRG - a technology that was originally developed in Australia commonly known as rapidwall technology. Using this construction system the precast panels have been erected on site using cranes and has its cavities filled with reinforced concrete. The usage of panel for both the walls and the roof - make it a monolithic structure thereby making it earthquake safe. The use of this technology helped to reduce the internal temperature and has enabled to gain precious carpet area. This green technology , which manufactures its panels using industrial wastes makes it an environmentally friendly way to build and also has minimum carbon footprint. The use of GFRG panels made it rather easy to erect the 45 degree steep pitched roof that enabled to create dramatic spaces of varying volumes within. The sloped roof is clad using locally sourced pink slate which changes its hue by the movement of the sun. A gentle splash of rain brings out a shimmering effect on its surface.

Anyone who enters the building experiences a sense of excitement as they are moving across varying volumetric spatial arrangement. Perched within front block of the house is a black kadappa clad water body with a traditional Kerala stone lamp used as a water spout. The open to sky water body brings in the fresh cool air into the living space. The gurgling sounds of the water body reverberates in the living room. The tall chapel like volume has a grand black and gold Lilly chandelier and a serpent floor lamp designed by Nirmal S John Britto for John Nir.London. The study area on the upper level interacts with the double height volume of the living and foyer area below. It also has a window that overlooks into the water body below as well.

The staircase doubles up as a seating area and a space to display the client's brassware collection. The bedrooms are provided with a pop-out window that becomes a comfortable nook to over look into the private garden. The family lounge on the first floor has ceiling at 8 feet height to make the space feel cosy and comfortable. The low height of the ceiling aided with ceiling high glass openings draws one's eyes outwards towards the garden and the landscape of the park beyond.

uploaded House of no bricks through Add A Home.
Add your own project for the chance to be featured in Editor’s Picks.

The chapel like ceiling of the Living Room overlooking the waterbody.

The screen wall that provides privacy for the water body is an integral part of the elevation detail.

The pop out box window in the bedroom overlooks the garden below.

Study area on the first floor overlooks into the living and waterbody below.

The front facade of the house roofed with pink slate complemented with walls painted in peach tones.

The sloped roof is clad using locally sourced pink slate which changes its hue by the movement of the sun. A gentle splash of rain brings out a shimmering effect on its surface.

The landscape space as a physical extension of the dining space.

Living room and waterbody. The waterbody has a tradition Kerala stone lamp which acts as a spout for the water feature.

The generous landscape space wrapped around by built spaces on 3 of it’s sides.

The colour of the house was chosen based on the colour pallet used in the previously demolished house.

The Staircase doubles up also as a seating space overlooking the garden space.