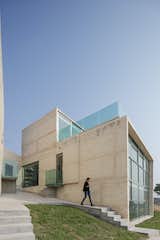 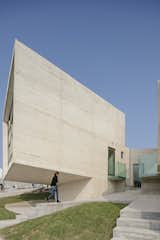 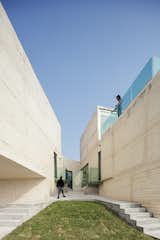 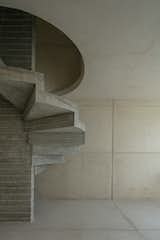 CASA LV1 (casa nanchi 1 y 2)
BRIEF DESCRIPTION OF THE CONSTRUCTION
The Casa LV1 (casa nanchi 1 and 2), is a multi-familiar conformed by two houses constructed in the same land, the main material used for its construction was white striated concrete.
DESCRIPTIVE MEMORY
The Casa LV1 (casa nanchi 1 and 2) is a complex of two houses designed for a family an elderly couple, their young daughter and their granddaughter. Each house has the necessary privacy for each development, with the interrelationship and coexistence of the family; they are located in an irregular diamond-shaped land of approximately 250m2, a gradient over 10% with a view to the southeast.
The Casa nanchi 1, on its main floor has: living room, dinning room, kitchen, bathroom, main bedroom with closet and its own bathroom, this floor is directly connected with the service area; the lower floor has a hall, two bedrooms with closet and its own bathroom; the upper floor has a roofed recreation room and a garden terrace. All the floors are connected by a stair, and has a parking lot. The total constructed surface is of 160 m2.
The Casa nanchi 2 has on its main floor: living room, dining room, kitchen, bathroom and service area; on the upper floor it has: main bedroom with closet and its own bathroom, an additional bedroom with closet, a little play room and a bathroom; on the lower floor, where the entrance is, has: two parking lots and an exterior stair which is connected to the other floors. The total constructed surface of the house is 145 m2 excluding parking lots.
Both houses share main entrance, service yard, green spaces and services.
The houses are named after the nanchi tree (byrosonimacrassifolia) that is located in that land; it was respected and the project was adapted around it, to make it a natural decoration for the dinning room of the Casa nanchi 1. This house was designed for an elderly couple and it has a terrace in the upper floor, which is a recreational and relaxing space with a view of the surroundings to enjoy with the company of family, friends and guests. It has a double-height space which allows the development of the tree.
The design of the Casa nanchi 2, which was designed for the daughter and granddaughter of the family, is inspired in the Brno chair, designed by the architect Ludwig Mies van ser Rohe, which not only allows a large volume, but also an efficient and free structural principle because with this solution is obtained an overhang of 4.85 m with a support of 2.85 m, generating a space without any support under the construction.
The concept of the houses is derogates no only from the connection (interior-familiar, exterior-landscape), but also from the visual freedom that people perceive before entering in the house and also in the interior of them. This is fulfilled by the volumetric integration that defined the spaces of each house, both prisms have specific substractions that allow a formal integration of the two elements; in the Casa nanchi 1 the terrace is subtracted and in the Casa nanchi 2 the parking area is subtracted, transforming both elements without losing its integrity.
The connection of both houses is so important that is not only achieved materially with the union of the two architectonic objects from the common entrance, connotating the link of the family, but also with the landscape, through the transparency in the facade of the two houses, which creates a visual freedom for the inhabitants. This gives a greater illumination of the spaces, producing a feeling of spaciousness and allows the air circulation due to the large windows that are handled by the users.
The material, white striated exposed concrete and stone dust of the region, recalls the honesty of the materials, this simplicity benefits the environment, because it doesn’t use coatings in walls, fooors or roofs, contributing the less possible to the pollution. The exposed finishes means less production, transportation and utilization of pollutant materials. As said before, the free circulation of air allows a constant cleaning of the interior air which allows a natural regulation of the temperature, achieving termic comfort for the users and reducing the use of electronic devices that cools artificially the place. Besides, the same large windows avoid the unnecessary use of artificial illumination during the day allowing the entrance of sunlight in the morning.