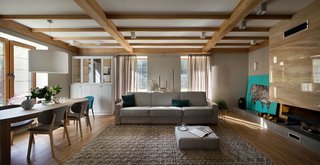 It was difficult and diligent work, but as a result we’ve got incredibly charming and soulful house. The original building has neither roof nor finishing, also a part of foundation was absent. We had to work very hard over the architecture of the building and the landscape. The result is a two-storey house of 240 sq m with three bedrooms, dining and living area, a kitchen, a lounge on the first floor, two bathrooms, laundry room and the furnace. The customer wanted to divide a whole space into several functional areas. The lion's share of the first floor was taken by the living room, where we also organized a dining area. The ceiling height was really a problem, but at the same time, it was the starting point for the entire home concept. We decided to set the rhythm with wooden beams on the ceiling, which helped not only visually stretch the space, but also create the necessary comfort. A fireplace became a beautiful decoration of the living room. We used marble to cover the fireplace. Dining area is located near the window. We intentionally abandoned a textile to open a panoramic courtyard view. Laconic and functional kitchen is separated by a system of sliding panels that reflecting a light. Also there is a comfortable zone for breakfast, which has become a favorite place of the customer. A slate tiles is practical and aesthetic solution for the walls in the kitchen and hallway. We put down the sills to let a light in, what has visually raised the ceiling. On the first and second floor we have made spacious halls with a gallery on the first and work place on the second one.
Photo: Andrey Avdeenko

uploaded House Lightray through Add A Home.
Add your own project for the chance to be featured in Editor’s Picks.