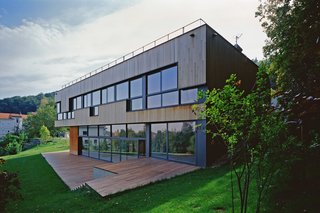 Family house K is situated on a large residential plot on a moderate eastern-facing slope at the edge of a forest near the base of Sljeme hill. By placing the object next to the street in the north-western corner of the plot, preference was given to a beautiful forest view; the uneven terrain was used as a means of developing the object’s volume.

The concept of the house is inspired by the shape of a snail’s shell, which involves a spiral twisting around its own axis, and as such all functional elements of the house follow each other and are built around a central atrium. The atrium was made in order to compensate for a lack of sunlight in the living-room area and enabled two-way lighting of certain rooms.
The house is maximally open and rises two floors towards a vast green meadow and forest; towards the street the house is enclosed by a simple ground-floor façade with a hidden garage door.

Almost in opposition to the progression of a snail’s home, we enter the K House through a modest and unnoticeable entrance situated at the edge of the southern façade. This is where the spiral movement around the atrium and through the half-levels begins; it ends in a big living room that opens towards the outdoor terrace and the forest.
Diverse and colorful elements which find a place in the home in order to satisfy the needs and wants of the inhabitants are developed in a 600 m2 area and in several half-levels, thus making the best possible use of the terrain’s difference in altitude and visually making the house appear smaller.

All façades and terraces are paneled with untreated teak boards. The use of wood paneling continues in the interior in response to the spiral progression, as well as to achieve an intimate and comfortable atmosphere. Therefore floors and, intermittently, walls are paneled with teak wood while ceilings and walls are primarily white. Black appears as an additional color accent on the walls, offering a means of directing one’s gaze and movement.
An interesting alternative to the straightforward coloring of the home interior was brought to bear in the wellness and swimming pool area. In this dim ambience with a predominantly black lattice ceiling and a wavy golden wall, true atmosphere is created by changeable RGB lighting ranging from purple to blue and giving the area an almost set design-like dimension.
A curious addition and final accent to the house were made by the roof terrace. One reaches it via an external spiral staircase that hangs in the atrium between the first level and the roof, thus accentuating the fact that a family house, besides being a home for a family, has also to serve as a place for indulging in companionship, comfort, luxury and gratification.

3LHD uploaded House K through Add A Home.
Add your own project for the chance to be featured in Editor’s Picks.

Entrance in he house and the garage

View of the house from the backyard

View of the house and the patio from the backyard

Kitchen and dining room with a view of the atrium

The concept of a house in Croatia by 3LDH is inspired by the shape of a snail’s shell, which involves a spiral twisting around its own axis. As such, all functional elements of the house follow each other and are built around a central atrium. The atrium was made in order to compensate for a lack of sunlight in the home.