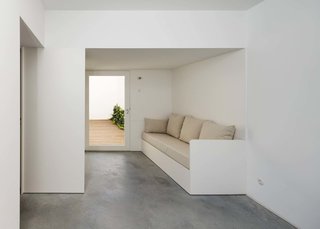 House in Alfama is a minimalist architecture project located in Lisbon, Portugal, designed by Matos Gameiro Arquitecto. Up on Alfama, near the Monastery of St Vincent de Fora and the National Pantheon, there is a little square, which marks a pause in the steep slope leading down to the river. This operation involves the rehabilitation of one of the buildings on the edge of the neighborhood, a rare example of a medieval building in an area dominated by buildings raised since the earthquake of 1755. It was a simple residence, which had resulted from the break-up of a larger palace complex that still exists. Over the years, the occupation of this small building gradually led to the construction of new walls that defined interior subdivisions, resulting a house served by two courtyards. The house was extended and altered, and the courtyards were gradually occupied.

uploaded House in Alfama through Add A Home.
Add your own project for the chance to be featured in Editor’s Picks.