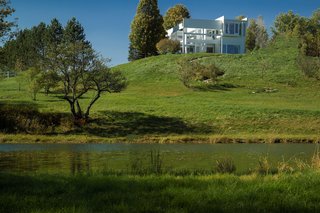 “One of the most famous houses of modernism…”
--Glenn M. Andres & Curtis B. Johnson, Buildings of Vermont

House II, located in Vermont’s rural and scenic Northeast Kingdom, is the first freestanding building designed by renowned architect Peter Eisenman (b. 1932). Today, Eisenman’s designs for buildings such as the Wexner Center for the Arts in Ohio, the City of Culture of Galacia in Spain, and the University of Phoenix Stadium in Arizona have cemented his reputation as one of architecture’s foremost designers and theoreticians. House II in Hardwick is where it all began, and today this icon of 20th century architecture is for sale and in need of a new owner willing to commit to its long-term preservation. This is a rare opportunity to own and experience firsthand a residential work of architecture by Peter Eisenman and understand the theories behind his designs and the deconstructivist movement.

Much of Eisenman’s early work was purely conceptual in nature and existed only in diagrams and text as opposed to actual built structures. In the late 1960s he began designing a series of ten houses and became associated with fellow architects Michael Graves, Richard Meier, Charles Gwathmey and John Hejduk, known collectively as the “New York Five.” Only four of the ten houses in the series were actually built, including House II. It is known worldwide as one of the earliest expressions of deconstructivist architecture, in which a building’s structure and envelope are fragmented and manipulated according to the theory behind its design.

House II challenges our conventional thoughts about the role and meaning of domestic architecture by using a deconstructive approach to reveal its underlying geometry, often at the expense of traditional notions of functional space. The result is a structure in which interior spaces flow not only from room to room but between floor levels and from interior to exterior. Perched at the top of a hill overlooking a rolling landscape of fields, trees and mountains, House II would make a wonderful vacation retreat or summer home.

uploaded House II / Falk House through Add A Home.
Add your own project for the chance to be featured in Editor’s Picks.