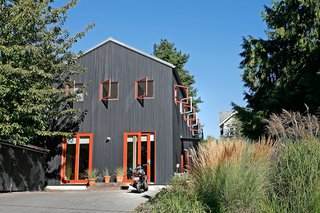 The client specified three very specific requirements for her house: a simple building form; square windows; and a gable roof. The resulting design is based on a series of contradictions, with the intent of generating elements of surprise – at first glance, the house might appear as one thing, but then is realized as another. From the street, the house appears a a single-story farmhouse, crouching down so as not to overpower its neighbors. Upon entering the site, one realizes that the house is actually two stories, with a series of doors that open the main living spaces to a south facing deck. Inside, the spaces are designed as blank canvases for the client (an artist) to fill at her discretion.

Robert Hutchison Architecture uploaded House for a Mother & Daughter through Add A Home.
Add your own project for the chance to be featured in Editor’s Picks.