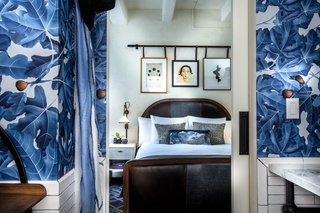 Downtown Los Angeles is, slowly but surely, reclaiming its status as the center of this expansive city. Its location, significantly to the east of Hollywood, places the Hotel Figueroa practically a world away from the beaches of Santa Monica and the west side. Downtown is all about city culture — this is a walkable world, close to The Broad, MOCA, Hauser & Wirth, and many independent art galleries, as well as Staples Center, Microsoft Theater, L.A. Live and the Convention Center.

The hotel originally opened in 1926 as the first hotel funded and founded by women, and was later in life a Moroccan-themed events space. After a massive renovation, it’s back to its original Twenties Spanish Colonial glory. The rooms are equal parts Twenties throwback and contemporary luxury boutique style, all of them decorated with original works by local artists, most of them women, in keeping with the hotel’s female-dominated art collection, which includes a mural by Bella Gomez.

Another part of downtown culture, of course, is food — here James Beard–nominated chef Casey Lane presides over a pair of restaurants, Breva and Veranda, which apply a Californian mindset to Mediterranean cuisine. Meanwhile Dushan Zaric pours inventive cocktails and well-selected spirits and beers at Bar Figueroa, Bar Alta, and Rick’s, out by the unique coffin-shaped swimming pool. This is a side of Los Angeles that you’d do well to get acquainted with, if you aren’t already.