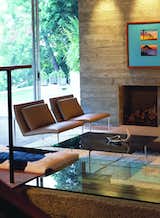 The Hillside House was designed by the influential Los Angeles modernist architect Carl Maston in 1962. Maston was most active during the mid-20th century and while he was at times overshadowed by some of his contemporaries, such as the Eameses, he nevertheless left an important body of work in Southern California and contributed to the great architecture and design legacy that defined the iconic mid-centruy period. The house had suffered from much neglect and bad alterations over the years and we were selected as the restoration architect. The work was tedious and forensic in nature, as every task required a lightness of touch, and the "peeling away" process of demolition required more finesse than typical reconstruction. Along the way, modern technology and conveniences were seamlessly integrated into the house. The result of the two year restoration effort yielded a meticulous structure for contemporary living while still conveying the value and spirit of the mid-century lifestyle. This was a labor of love for the client and the house is now listed as a City of Los Angeles cultural landmark. It was awarded an AIA Design Award and a Historic Preservation Award from the City's Mayor and Cultural Affairs Department.