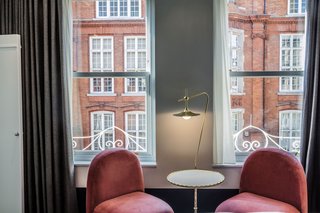 Don’t be fooled by the name — the Experimental Cocktail Club is more than just an adventurous group of drinkers. They’ve got bars by that name in Paris, New York, and London, as well as a couple of excellent Parisian boutique hotels and some highly regarded London restaurants. And now they’ve added the Henrietta Hotel & Restaurant to their portfolio, in what might just be the very heart of central London: Covent Garden.

One of these two townhouses, at 14 & 15 Henrietta Street, was the home of Victor Gollancz Ltd., publisher of George Orwell and John Le Carré. Here the Experimental Cocktail Club once again tapped Dorothée Meilichzon, the designer responsible for their Grand Pigalle Hotel in Paris, to create an interior space that’s at once classic and contemporary. With just 18 rooms there’s a certain intimacy about it, and a residential vibe which is hard to come by in this part of London.

The restaurant, under the guidance of celebrated chef Ollie Dabbous, has attracted its own fair share of attention, and the bar’s creations are a reminder that there’s good reason for Experimental Cocktail Club’s fame as well. To have all of this under one roof is, quite frankly, a notable addition even for so storied a neighborhood as Covent Garden.